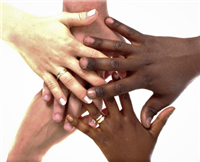 The mission of the Racial Justice Ministry is to engage every setting of the Southern New England Conference of the United Church of Christ to eradicate racism in our personal, interpersonal, institutional and cultural realms.

A Reflection on Ahmaud Arbery's Murder and Racism,  by Rev. Dr. Donique McIntosh

Performative Allyship is Deadly:  Here's What To Do Instead

Strange fruit Jolie Rock, Resident Artist at St. Peter United in Houston Texas, performs this song which she states is "not meant to make you feel good."

The Cross and the Lynching Tree: A Requiem for Ahmaud Arbery,  video of Rev. Dr. Otis Moss Jr’s cinematic sermon preached at Trinity UCC Sunday, May 17

Raising Anti-Racist Kids: Empowering the Next Generation of Change-Makers

"Racial Trauma in Film: How Viewers Can Address Re-traumatization" from Northwestern University

Where is my church on racial justice?

Welcoming Diversity: An Inventory for Congregations

PRC Resources for racial justice, immigration and the environment