There are times when voices outside of congregations, associations, and the Conference can have a different perspective and shed new light on the call to racial justice.  These two podcasts feature former Racial Justice Associate TJ Harper interviewing two experts in the realm of racial justice . 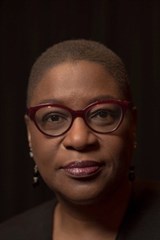 What is the Church’s Call to Racial Justice in the 21st Century? Rev. Dr. Velda Love

Rev. Dr. Velda Love and TJ Harper discuss steps congregations can take to be more involved in racial justice and create sustained, positive change such as addressing institutional racism, while also teaching its members about the Intersection of Race & Spirituality.  Rev. Dr. Love also shares her personal story and life journey within the UCC, and the importance of using our experiences to affect our mission.

The Rev. Dr. Velda Love joined the National UCC as Minister for Racial Justice on February 1, 2017,  beginning her ministry to help the church live into its vision of building a just world for all. Prior to joining the UCC, Love spent nine years (2008-2017) at North Park Theological Seminary in Chicago as an adjunct professor and conference speaker, and served North Park University as the director of intercultural justice and learning for 16 years (2000-2016).Love earned her bachelor's degree from Roosevelt University in 1990, and a master's degree from North Park Theological Seminary in 2006. She attended Chicago Theological Seminary and obtained her D.Min. in 2016, and served various boards and task force that address interfaith dialogue, homelessness and youth incarceration.

r. Beverly Daniel Tatum served as the ninth president of Spelman College in Atlanta, Georgia (2002-2015) and also acting president of Mount Holyoke College in South Hadley, Massachusetts (2002), where she also served as a professor of psychology and education and later as chair of the Department. A nationally recognized authority on racial issues in America and a licensed clinical psychologist, she has toured extensively, leading workshops and presenting papers and lectures on racial identity development.

Dr. Tatum is the author of the critically acclaimed book, Why Are All The Black Kids Sitting Together in the Cafeteria? And Other Conversations About Race. She earned a Bachelor of Arts degree at Wesleyan College and Master of Arts and Doctor of Philosophy degrees in clinical psychology from the University of Michigan, as well as the Master of Arts degree in religious studies from Hartford Seminary.