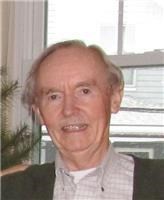 Born in Davenport, Iowa, Bill graduated from Colgate-Rochester Divinity School and served as the pastor of congregations in South Beaver, IA; Mount Desert Island, ME; Meriden, CT; and Attleboro Falls, MA.  As the nature of parish work shifted in the early 1970's, Bill left formal ministry and began a career with the State of Massachusetts as a disability claims analyst, and later a vocational specialist.  After retiring in 1996, he was able to bring new focus to his life-long interest in watercolor painting. He was invited to join the Rhode Island Watercolor Society, participating in several shows. His work ranges from landscapes of the Newfoundland coast to commissioned house "portraits," to a remarkable cityscape of Boston's Faneuil Hall district.

He and his wife Joanne spent many happy years enjoying camping, canoeing and biking. He would sketch and paint and she would write poetry.  Bill had a profound faith in God. He reveled in the beauty of the world, whether revealed as the depth of field in a landscape spread before him, a garden of roses that inspired a poem, or the infinitude of stars and galaxies in the night sky. He appreciated those around him as unique creations of God, and treated everyone with a charming kindness and grace. He died knowing that his life had been blessed, and that he would be rejoining his beloved wife, Joanne.