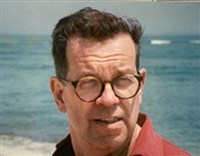 The Rev. Theodore Paul Fritsch of North Chatham died peacefully on February 24, 2021. Ted is survived by Mary Ann, his wife of nearly 60 years, sons Peter (Lynn) of Bethesda, MD and Andrew (Enid) of Harwich, grandchildren Sara, Anya, Chase and Elena and extended family from Mexico to Germany. He also leaves Ricardo Vasconcellos, his best friend and constant companion in his final years; Ricardo's patience and kindness embody the spirit of Ted's ministry.

Ted was the youngest and last surviving of three sons born to Rev. Carl Fritsch and Helen Morrill in Maplewood, Missouri. With his passing, cousin Mathias Fritsch of Friedberg In Hessen becomes the last in an unbroken line of Fritsches called to the church going back to cantor Wilhelm Fritsch in 18th century Germany. He is predeceased by brothers Carl of Culver City, CA and Jack of Mexico City, Mexico.

Too young to follow his brothers into the military during World War II and its aftermath, Ted matriculated at Antioch College in Yellow Springs, Ohio. There a bookish boy discovered a talent for leadership and organization that would become his hallmark. Antioch was a progressive place and Ted would eventually be elected the school's Community Manager, a prestigious position representing the student body before the university's governing bodies. Involvement with the school's Interracial Education Scholarship program led him to befriend Coretta Scott, a young girl from Alabama. That friendship would later land him in a Chevy on a road trip to Boston with "Corey" and her future husband the Rev. Martin Luther King Jr. (Ted would join the crowd for King's March on Washington more than a decade later.) "Marty was a fine young man," Ted would later recall.

Ted earned his Master of Divinity from Yale University in 1957 and was ordained in the Congregational Church. His first parish would involve a radical change of scenery: The budding aerospace industry in California's Mojave desert was full of Eastern transplants eager to start a church in their own tradition. Ted moved to Lancaster and began a "mission" church from scratch, a profound challenge for a newly-minted pastor. On a trip back East to visit friends several years later, Ted met Mary Ann Ball, a former art student from New Jersey then designing department store windows. They were married in 1962. Mary Ann joined Ted in what she called "Land Scatter," a place of infinite horizons and spectacular sunsets. Their first child, Peter, was born there in 1963. He and Ted would return 25 years later for the church's mortgage burning ceremony, a moment of deep pride.

In early 1964, the family pulled up stakes for another cross country move. Ted became the associate pastor at State Street Church in Portland, ME where he served under dear friend Harper Welch for the next 10 years. A second son, Andrew, was born there in 1966. After hours, Ted ran a church-sponsored coffee shop for the disenfranchised called The Gate. It became something of a hothouse of protest politics – and a weigh station on the underground railroad for conscientious objectors. Ted himself was no rule breaker, however. When Peter Paul and Mary stopped by after a gig to check out the scene, Ted regretted to inform them that the Gate was closed for the evening.

They call Maine vacationland and the 70s were marked by glorious family camping trips to Baxter State Park and canoe trips on the Saco river. Ted was always game, even if his woodcraft left a bit to be desired (mosquito netting is a must during black fly season). In the summer he and the boys enjoyed fishing for flounder and foraging for hermit crabs on Cape Cod, home to Mary Ann's mother. He endured bouts of seasickness on Nantucket Sound to put his boys on the fish.

Opportunity called Ted to a bigger church in 1974 and the family pulled up stakes for the village of Bronxville, NY and its Dutch Reformed Church. This time coincided with the end of the Vietnam War and Ted cared for a family of refugees who took an apartment in a church building. Ted and Mary Ann took advantage of the proximity to New York to take in the latest exhibits and attend operas at the Met. The family took particular pride in participating in a tutoring program for kids at the Elmendorf Reformed Church, Harlem's oldest.

Ted's last full-time posting was at the First Parish of Westwood, MA, where he served from 1981 to 1993. His time there was marked in part by the implementation of an idea he imported from Maine – an ecumenical society to bring together the area's Christian, Jewish and Muslim communities in the spirit of mutual support and service. The Westwood Interfaith Council proved crucial to the survival of Temple Beth David after it burned to the ground in a 1987 hate crime. Ted arranged financial support for the temple through the council and offered First Parish to house its services. An enduring friendship with Rabbi Hank Zoob was the happy byproduct of this sad episode.

In retirement, Ted has an active member of the Chatham, MA community. He served as president of the Friends of Eldredge Public Library and on the town Finance Committee. Ted was an active member of the First Congregational Church of Chatham, St. Christopher's Episcopal Church and Chatham Men's Club. He treasured his regular trips to Tanglewood and the BSO with Mary Ann. Active in Democratic politics since falling "Madly for Adlai" in '52, Ted was an ardent supporter of state and local candidates to the last.

A lover of the printed word, Ted loved the poems of Rilke and the sermons of William Sloane Coffin. In church, he always sang harmony. He will be remembered for his generosity of spirit and purse, his unfailing dependability and a staggering work ethic.