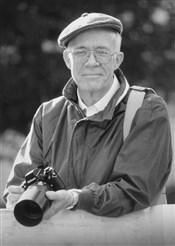 He was born in Peking, China on January 5th, 1927, the son of Dr. George W. Van Gorder and Helen Goforth Van Gorder, who were on the staff of Peking Union Medical College at the time. He graduated from Williams College and Union Theological Seminary, New York City, and was a U.S. Army veteran of World War II.  Ordained in 1954, the Rev. Robert "Bob" Van Gorder served the following churches: The Old South Congregational Church of Farmington, Maine 1954-1959; the Federated Community Church of Hampden, MA,1959-1969; and the First Congregational Church of Westbrook, CT, 1969-1991.  As an expression of their appreciation for his ministry, the members of the Westbrook Church honored him with the title, Pastor Emeritus.

In the communities where Rev. Van Gorder served he was active in supporting a variety of programs. They included Literacy Volunteers, Planned Parenthood, Alcoholics Anonymous, the resettlement of several refugee families, and he directed a number of health organizations such as the Westbrook Public Health Advisory Committee and the Westbrook Mental Health Day Care Center, which later became Gateway Counseling. He was also a director for the Westbrook "Safe Harbor" elderly housing project, and served as Chaplain of the Westbrook Fire Department for eight years. Bob served on the United Church of Christ State Conference Committee on Aid to Ministers.

Bob was a gifted photographer, and won numerous awards for his photographs, including two international competitions. His photos often reflected his lively sense of humor and deep interest in people, and he had a special "eye" for the artistic and the beautiful. Bob enjoyed sharing his hobby at the New Haven Camera Club and created a wide variety of slide programs with music, as well as numerous prints.