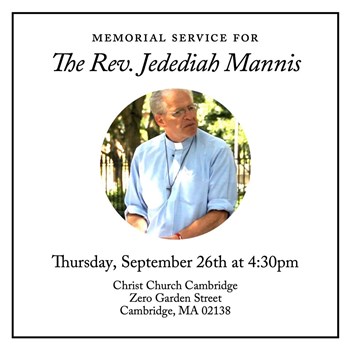 The Rev. Jedediah Mannis, co-founder of the Outdoor Church in Cambridge, died early Monday morning, September 9th. The Outdoor Church will hold a memorial service on Thursday, September 26th at Christ Episcopal Church, 0 Garden Street, Cambridge. All are welcome.  There will also be a family memorial service held at King’s Chapel in Boston.  Details for that service are not yet available.

To those of us who knew him and worked with him, he was Jed. For the street folks of Cambridge, he was "Jedediah." They were his parishoners and he was their pastor, the man who tirelessly counseled them, visited them in shelters and hospitals, and offered them Communion at Porter Square worship services, and on Sunday and Tuesday night walk-arounds. Sometimes he also helped them with their legal problems. He and the Outdoor Church staff and volunteers provided food, water and socks, too, but Jed always said the ministry was a church first, and that the food that fed the hungry homeless was a sacrament.

Jed was a New York native who came to Boston by way of Yale University. He was a lawyer for 30 years before he found his second calling, tending to men and women who were ignored by almost everyone else. He started the Outdoor Church with co-founder and Episcopal Deacon, the Rev. Pat Zifcak, in 2003. He got a Harvard Divinity School degree in 2004 and was ordained in the United Church of Christ. In 2009 he published a book about his work, Joseph Tuckerman and the Outdoor Church, and he was always a teacher, most of all by what he did week after week. His spirit will abide on the streets where he did so much. Rest in peace, good and faithful servant.