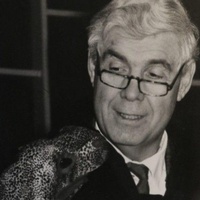 Minister and Missionary, The Rev. Charles Philip Blakney, died in-hospice at his So. Hadley home, Dec. 18, 2018, his wife, the former Dorrie Alderman, and step-son, Jonathan Wilhelm, at his side. Blakney, age 90, was Minister Emeritus of the First Congregational Church of So. Hadley, which he served as pastor from 1970 until his formal retirement in 1993. Retiring with him at that time, were his two sidekicks, Phineas T. Loser and Dragon, the two hand-puppets that resided in a hatbox which made its appearance every Sunday with Blakney at the pulpit. They were fashioned by his late, first wife, the former Lorrayne P. Grimm. Following the onset of retirement, Blakney assumed abbreviated pastoral assignments in Orange, Shelburne, and Wyben, MA., as well as a semester in Hefei, China, where he and his wife Dorrie taught English. Born in Sanford, ME., Blakney graduated in three years from Williams College, where he majored in art and music. Every morning on campus he climbed 46 steps up into the bell tower of Thompson Memorial Chapel, to play the college's Carillon chimes before classes began. Blakney distinguished himself in wrestling, capturing the title of New England Intercollegiate Wrestling Champion. He received his B.D. Degree from Andover-Newton Theological Seminary, now part of Yale University, continuing his studies at Boston Univ. and the Hartford Theological Seminary, from which he holds a Master's degree in linguistics, specializing in African languages. After ordination in the Congregational Church at Worcester, Blakney served in Saxtons River, VT., before deciding to continue in the footsteps of a missionary tradition that had actually begun 150 years earlier in the Williamstown Congregational Church his father, the Rev. Raymond Blakney, pastored. And like his father, and mother, the former Laura Marsh, who had become the 91st and 92nd foreign missionaries from that congregation, Blakney would become the 93rd member of the Williamstown church to decide on a career in foreign missions. From 1955 to 1967, first in Chikore and then in Salisbury, Rhodesia, Blakney served as minister, church superintendent and university lecturer in the Bible and in African religions. His responsibilities included supervising 50 schools with 11,000 students, and preaching in several languages. One Sunday, in 1967, shortly after delivering a sermon, Blakney was arrested by the local police. Blakney's trial made headlines on the front page of The New York Times. After his release by authorities and payment of a fine, Blakney decided it was time to remove his family from the political unrest in Rhodesia, which would soon become Zimbabwe. He accepted a post as Regional Secretary for Europe of the United Church Board for World Ministries in New York City. From there he moved into the ministerial post in South Hadley. Blakney served as President of the Holyoke Rotary Club and received its distinguished Paul Harris Fellow award. He also served as secretary of The Club, a scholarly enterprise. He loved birds, led bird walks, and illustrated brochures, newsletters and a poster for Northeast Utilities, with his feathered friends. His sermons were all reduced to essence in a poem in iambic pentameter, printed in the morning program. No matter how mundane the topic, he expressed himself with an elegant turn of phrase and good humor. He considered himself an “authority” on cowboys. Before a stroke in 2005, which impaired his hearing, he played the piano every day and several other instruments. Besides his wife, Dorrie, and stepson, Jonathan, Blakney leaves four children: Robert in Warrenton,VA., Richard in Weymouth, MA., Catherine Ann Kavassalis in Oakville, Ontario, Canada, and Carol Blakney-Alves in Muncie, IN.; four grandchildren; a great grandchild; and several nieces and nephews. The memorial service will be held Saturday, Jan. 26 at 2 pm at the First Congregational Church in So. Hadley center, followed by a reception in Fellowship Hall. Burial will be in Evergreen Cemetery, So. Hadley, at the convenience of the family. In lieu of flowers, donations may be made to the mission fund at the church, earmarked for Zimbabwe.

The memorial service was held Saturday, January 26, 2019 at 2:00pm at the First Congregational Church, 1 Church Street, South Hadley, MA 01075.  A reception followed in Fellowship Hall.  In lieu of flowers, donations may be made to the mission fund at the church, earmarked for Zimbabwe. Arrangements are with the Curran-O’Brien Funeral Home.