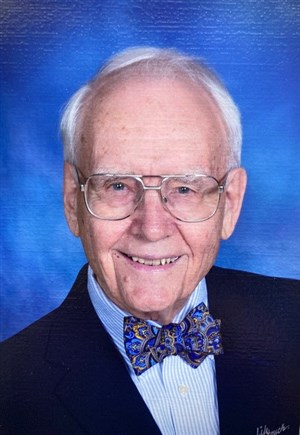 The Rev. Leonard George Clough died on August 25 in West Hartford, Connecticut at the age of 101. Len was born in Somersworth, NH on February 12, 1920 to Arthur E. and Helen Piper Clough. He attended school in Orrington and Brewer, ME, and graduated with honors from Bates College in 1940 and the Yale Divinity School in 1943. He lived most of his life in New England with several years in New Jersey and Geneva, Switzerland

The Rev. Clough served the church and associated institutions for 42 years in several roles: pastor, administrator, and fundraiser. His service to the church included ministry as Associate Pastor of The First Church in Cambridge, Congregational in Massachusetts; the YMCA of New England Secretary on the staff of the New England Student Christian Movement; Senior Pastor of the Church of Christ at Dartmouth College; the General Secretary of the National Student Christian Federation (later called the University Christian Movement); and the Assistant General Secretary of the World Student Christian Federation. Len completed his career as the National Director of Planned Giving for the United Church of Christ in 1985.

A major focus of his ministry in the parish and as a regional, national and international ecumenical executive was involvement in campus ministry. He was deeply engaged in the Civil Rights struggle, and was present at Dr. King’s “I Have A Dream” speech in Washington in 1963 and participated in the Selma to Montgomery Civil Rights March in 1965. His work with international students gave him the opportunity to travel the world in the late 1960’s and engage with students at an exciting time when the winds of national independence were sweeping the southern hemisphere.

In 1971 Len turned his considerable talents to a new fundraising discipline now called planned giving. He was a highly respected pioneer in this field often asked to speak at training programs and conferences and is the author of a primer for newcomers to the profession. He was an early member and president of the Philanthropic Planning Group of Greater New York and in the early 1980’s was asked to join initial planning sessions for what was to become the National Association of Charitable Gift Planners. In 1973 he founded the consulting firm, Planned Giving Specialists. Following his retirement in 1985, Len continued to mentor planned giving officers and volunteered his services to local nonprofit organizations in Connecticut.

He was predeceased by his parents, his brothers Merton and Donald Clough, his son-in-law Graham Hillsdon, and his wives, Shirley Huse Clough, Mona Parkinson Clough, and Betty Keirstead.

A man of great humor, intelligence and humility, Len Clough will be missed by his family and friends. Although he outlived all of his contemporaries, he was much loved and admired by family, friends, former colleagues and the staff of the retirement home where he lived his final years where he was known simply as The Reverend.

Funeral arrangements are under the direction of Vincent Funeral Homes and a memorial service will be held on September 18, Noon, at the First Church of Christ Congregational, 12 S. Main Street, West Hartford, CT 06107. In lieu of flowers, donations in Len’s memory may be made to Bates College. Please visit Len’s “Book of Memories” at www.vincentfuneralhome.com for online tributes.