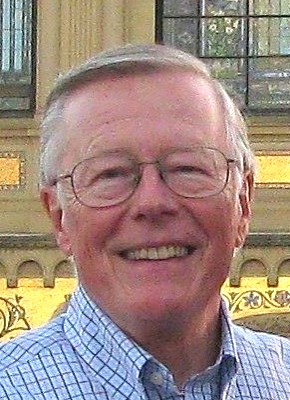 Ken was born in Lynn, MA to the late Alden P. Landall and Psyche (Line/Landall) Douglas, and grew up and lived in Pittsfield, MA. He graduated from Pittsfield High School, and from the University of Rochester, NY with a B.S. in Business Administration, where he was a member of the Tau Kappa Epsilon fraternity, president of the Marching Band, member of the Concert Band, and student director of the Pep Band.

After graduating from college he began a banking career at City Savings Bank of Pittsfield, starting as a management trainee and concluding 11 years later as Vice President of Marketing. He also earned a Chartered Life Underwriters (CLU) designation. In 1963, he married his high school sweetheart, Claudia (Taylor), and they had two children, Erik and Stuart.

In the early 1970's, Ken felt a call to the Christian ministry, and the family moved to New Haven, CT, where he graduated Yale University Divinity School, and was ordained in 1976. He served the King Street United Church of Christ in Danbury, CT as senior pastor for 13 years, and then served the Pilgrim Church, UCC in Duxbury, MA for 17 years, retiring in 2006. Both churches, under Ken's leadership, experienced considerable growth in congregation membership as well as physical expansion of the entire church facilities. Ken also served the wider church in many leadership capacities in both Connecticut and Massachusetts. In CT, he chaired the Fairfield East Association's Church and Ministry Committee, was president of the Association of Religious Communities in Danbury, and served on the executive committee of the Board of Directors of the Connecticut Conference UCC. In MA, Ken was president of the Duxbury Interfaith Council, active in the Pilgrim Association, chaired the search committee for the Southeast Area Minister for the Massachusetts Conference UCC, and served on the Board of Directors of the MA Conference UCC. He and Claudia also coordinated senior high youth conferences and then adult family conferences for several years at Star Island Conference Center in the Isles of Shoals off Portsmouth, NH.

When he retired, Ken and Claudia moved full time to their home in Harwich on Cape Cod. During most of his adult life, Ken enjoyed singing in church choirs, bicycling, playing guitar and flute, photography, and reading. In retirement, he also had fun performing in more than a dozen plays and musicals, mostly at the Academy of Performing Arts in Orleans, playing and singing in the Cape Cod Ukulele Club, and being part of a retired clergy group on the Cape. In his local church, he served on the finance committee, co-chaired the stewardship committee as well as sang in the choir and men's group. He liked being a pulpit supply preacher in many UCC churches and retirement homes around the Cape. He and Claudia enjoyed many visits to Santa Cruz, CA, where they visited their family, were members of Peace UCC and sang in its choir.

Ken will be remembered for his smiling countenance, upbeat nature, sense of humor, hopeful faith, and care and devotion to his family and friends.