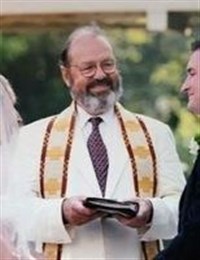 John was born to Ellis Walker Hay and Marian Inga Smith Hay in Indianapolis,IN. He spent his youth in St. Louis and after graduation from St. Louis Country Day School, attended Amherst College, receiving his B.A. in 1963.  His strong Amherst friendships lasted all his life. Two of John's passions were religion and drama. He pursued both at Yale, earning a MA in Divinity in 1968 and a MFA in Drama in 1972. In Divinity School he met Carol Squire and they married in 1966.

John taught drama at Simon's Rock College of Bard from 1972-1975, and he was the minister of the Mount Washington Church of Christ from 1969-1975, building a house in that small Massachusetts town and forging with its people a lifelong bond.  John was minister of the Salisbury Congregational Church from 1975-1980, then senior minister of United Church on the Green in New Haven, CT, from 1980-1991.  After his retirement from full-time ministry, John served several Connecticut churches as interim minister and practiced Jungian counseling in New Haven.

John Hay was a man of enthusiasm. He believed passionately in the power of the spirit to transcend and ameliorate human pain and frailty. He helped countless students, parishioners, and friends with their lives, always listening with loving patience. His sermons inspired many to serve humanity. He was also enthusiastic about living an active, bold life, taking up, with serious purpose: travel, sailing (at Silver Bay on Lake George), hiking, canoeing, bicycling, house building (two houses), astronomy, and sculpture. John lived a full life. Those who lived it with him shared in its fullness and joy.

A service is planned in Mount Washington, MA for spring or summer 2021.  Contributions in his memory may be made to the L.E.A.P. organization of New Haven or the Nature Conservancy.