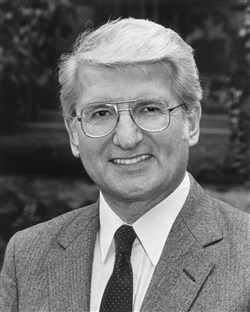 The Rev. Dr. Gabriel J. Fackre died in Oregon City, OR on Wednesday, January 31, 2018.  His wife Dorothy predeceased him on October 13, 2017.  He is survived by his five children: Bonnie, Gabrielle (and husband Thomas), Judith, Skye (and husband Christopher), and Kirk (and wife Alice); as well as eight grandchildren and their spouses: Ben (and wife Kristin), Gil (and wife Michelle), Acacia (and husband Michael), Cole, Kyr, Charlotte, Campbell, and Casey; and one great grandson Sawyer.

Dr. Fackre attended Bucknell University and received his B.D. and Ph.D. from the University of Chicago.  Dr. Fackre was Samuel Abbot Professor of Christian Theology, Emeritus at Andover Newton Theological School in Newton, Massachusetts.  He was on the school's faculty for 25 years before retiring in 1996. Previous to that he was Professor of Theology and Culture at Lancaster Theological Seminary in Pennsylvania, teaching there from 1961 through 1970. He also served as visiting professor or held lectureships at 40 universities, colleges, and seminaries, including Oxford and Cambridge. His papers are housed in Special Collections at Princeton Theological Seminary Library.

"Gabe's teaching and publications shaped the theological thinking and communication skills of several generations of UCC ministers and theologians," said Massachusetts Conference Minister & President the Rev. Dr. Jim Antal. "From the classrooms of Lancaster Theological Seminary and Andover Newton Theological School, to his weekly Table Talk gatherings, to the annual Craigville Colloquy, to his tireless endeavors representing the United Church of Christ in the nine-denomination Consultation on Church Union - Gabe brought his incisive and comprehensive theological insight. Informing all of this was his profound recognition of injustice in all its forms, and his exemplary, outspoken witness against racism, inequality, homelessness and environmental exploitation. In all of this, his wife of 72 years, Dorothy, was a full collaborator, partner, and source of joy."

(Read a tribute to Dr. Fackre on the United Church of Christ website here.)

Dr. Fackre’s vast scholarship in the fields of theology, ethics, and mission extended to thirty books and monographs, among them five volumes of a series on Christian doctrine, The Christian Story.  He contributed to another ninety volumes, and published over three hundred articles and book reviews. He was president of the American Theological Society.

As an ordained pastor and a professor, he understood the bond between word and deed, and he lived that as a standard bearer of the faith.  Reinhold Niebuhr and Karl Barth were influential in his theology, and his mentor at the University of Chicago Divinity School was James Luther Adams.

Dr. Fackre and his wife Dorothy committed early to social action, beginning with a campaign to bring Nisei students from World War II internment camps to Bucknell and taking part in a Quaker “peace caravan” in the closing year of the war.  In Chicago, Dr. Fackre led a walk-out and protest at the Quadrangle (faculty) Club at the refusal by the majority of its members to include in membership an African-American professor. While at Chicago, after a student trip to study “The Church and the Working-Classes in Great Britain,” Dr. Fackre and his wife served a mission congregation in the back-of-the yards district, then spent a decade in a two-point mission charge in the steel mill towns of Homestead and Duquesne, PA addressing issues of the working poor.

In the 1960s when he was a professor at Lancaster Theological Seminary, he helped found a network of “freedom schools” for young black and white Lancastrians, and participated in demonstrations for civil rights in the city.  Dr. Fackre joined Martin Luther King’s March on Washington in 1963, and was part of a United Church of Christ contingent that assisted in voter registration in Canton, Mississippi in 1964. He and his wife Dorothy campaigned together to integrate Lancaster’s de facto segregated junior high schools, and helped to found The Lancaster Independent Press, and a coffee house out of which much of the foregoing activity emanated.
​
When Dr. Fackre was called to teach systematic theology at Andover Newton Theological School, the Fackres helped to found another citizens' newspaper, The Newton Times. Both he and his wife participated in peace and justice activities during their twenty-five years in Greater Boston. In retirement on Cape Cod, they advocated for the homeless, efforts in environmental amelioration, and peace concerns. Dr. Fackre voted his powerful conscience to the end, holding the faith strong as he watched the nation grapple again with the concerns of his lifetime.

"Gabe was one of my theology professors at ANTS and I actually took the last class he taught before retiring. Of course, it was on Niebuhr" said Scott Spencer, Pastor of the Woodridge Congregational Church in Rhode Island. "Gabe and Dot continued as personal friends of mine and supported my ministry in prayer and occasional visits. I found both to not only be smart, engaging, and challenging, but generous and kind and as people I always knew wanted the very best for me. I will miss them dearly but remain thankful to God for having known them."

There will be a memorial service at South Congregational Church, 565 Main Street, Centerville, MA on Saturday, March 3, 2018, 3:00pm.  In lieu of flowers donations can be made in his memory to the Fackre Scholarship for the Craigville Theological Colloquy, care of CCMA, 39 Prospect Avenue, Craigville, MA 02632; to South Congregational Church, UCC, 565 Main Street, Centerville, MA; to Confessing Christ, care of Wisconsin Conference – UCC, 4459 Gray Road, DeForest, WI 53532; or to the Homeless Ministries of the Cape Cod Council of Churches, 320 Main Street, Hyannis, MA 02601.