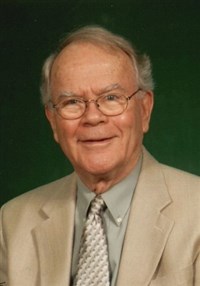 The Rev. Duey, better known as Chuck, is survived by his wife, Eleanor (Johnson) Peterson Duey. They were married for 40 years and lived in West Hartford, Newington, and most recently, among friends and colleagues at Covenant Village of Cromwell, Connecticut.

In 1978, Eleanor and her two daughters joined the family: Jeanne Peterson (Steve Zieger) of Avon, CT; and Karen Peterson (Mark McNamara) of Houston, TX. All the children and extended family have been a wonderful and caring family. In addition, there are nine grandchildren and four great-granddaughters.

The Rev. Duey was first ordained in the Evangelical Covenant Church, and he and Alice served as missionaries in Alaska and later in Ecuador for eight years. While working in the education system, they also established a new congregation in Guayaquil, which went on to become a national Covenant church. It celebrated its 50th anniversary in 2016.

In 1967, The Rev. Duey received a call to be the pastor of the Covenant Congregational Church of West Hartford and served there for 20 years.  He also served as interim minister in four United Church of Christ churches in Newington, Stratford, Cheshire, and East Hartford.

Across the years, he graduated from the University of Miami, FL; Fuller Seminary (M.Div.); Princeton Seminary (Th.M.); and Andover Newton Seminary (D.Min.).

A memorial service will be held at the Church of Christ Congregational Newington, 1075 Main Street, Newington on Saturday, April 28 at 11:00 AM.  The family requests that in lieu of flowers, donations can be made to either the Newington Church or the Benevolence Fund of Covenant Village of Cromwell, 52 Missionary Road, Cromwell, Connecticut 06416. Burial will be at the convenience of the family.

Go to the full obituary