The Rev. Russell A. Ayre

The Rev. Russell A. Ayre 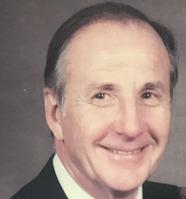 The Rev. A. Russell Ayre, 92, Pastor Emeritus of the First Congregational Church of New Milford, died peacefully April 10, 2017, at his home in Village of Golf, FL.

The Rev. Ayre was a 1951 graduate of Yale Divinity School. His first ministry post was at the Congregational Church in Derby, CT, which was followed by a stint in Mansfield, MA, The Rev. Ayre began his ministry in New Milford in 1957, and continued there until his retirement in 1989.

During his tenure in New Milford, Rev. Ayre made many lasting contributions to the community. Within the church, The Rev. Ayre directed numerous capital improvements, including the parish expansion. His guidance was also critical to the establishment of New Milford Interfaith Housing, which developed Butter Brook Hill Apartments, a senior housing facility, and Chestnut Grove, a congregate housing facility, and later Glen Ayre, which was named for Rev. Ayre. Additionally, he applied his love for education to his role as the chairman of the New Milford Public Library board for 20 years, overseeing the renovation and expansion of the facilities.

The Rev. Ayre was predeceased by his wife Helen of 68 years; three brothers, Ed, Harry and Richard of Springfield, Mo., and a granddaughter, Emily Ayre. He is survived by his three children, Rick, and his wife, Sue, of Bellevue, Wash., Jon; and his wife, Nancy, of Woodbury, Conn., and Martha, and her husband, Andrew Ladner, of Village of Golf; 11 grandchildren, Russell, Kate, Colin, Sarah, Mike, Amanda, Abigail, David, Jonathan, Melissa and Katherine; and five great-grandchildren, Austin, Ella, Quinn, Lila, and Billie.