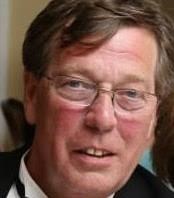 The Rev. M. John Arens passed away on March 8, 2022.  He leaves his wife Alberta; his two children, Erika Gillis and her wife Bethany, Conor and his wife Stefanie, three grandchildren, Andersen, Adeline, and Liam (who lovingly called him BomPa.) He has left many dear family members and friends and we are all the better for his time walking by our sides.

Lincoln Dairy, St. Thomas Seminary, Cranwell Prep, St John's Seminary all were privy to his wonderful presence and the sound of his laughter and love. John was ordained a Roman Catholic priest in 1976. Eight years later he met and married his soul mate, Alberta, and together they raised their daughter Erika and son Conor.

He obtained standing in the UCC and served as Pastor in New Milford, Watertown, and New Preston, Ct. before retiring to Ft. Lauderdale, FL to continue service to the UCC of Fort Pierce.  His years in Waterbury, CT were filled with wonderful friends, worldwide travels and a constant need to be of service to others. Waterbury was a place where John became a loving father and husband but also a well-known "baker", teacher, and spiritual UCC minister. He would bake for anyone who did him a service – his doctors' offices, pharmacies, and for the healthcare staff at Charlotte Hungerford Hospital where he served as Chaplain.

John was a phenomenal preacher of the Gospel, 'In Season and Out'. He challenged us always 'to bend down only to lift the hand of a soul in need, up into the sun light'. John had a wonderful irreverent sense of humor and never took himself too seriously.  He chose to bring a smile to one's face but never a frown.

The family asks that you celebrate him as heartily as you warmly remember him! The road has risen to meet and welcome him home. Slainte' our dearest friend who lived his life "his way".  Services will be held at the family's convenience.