The Rev. Peter J. Gomes, a Harvard minister, theologian and author who announced that he was gay a generation ago and became one of America’s most prominent spiritual voices against intolerance, died on Monday in Boston. He was 68. 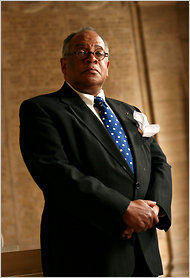 His death, which was first reported by The Harvard Crimson, was confirmed by Emily Lemiska, a spokeswoman at Massachusetts General Hospital, where Mr. Gomes had recently been treated. He lived in Cambridge and Plymouth, Mass.

One can read into the Bible almost any interpretation of morality, Mr. Gomes liked to say after coming out, for its passages had been used to defend slavery and the liberation of slaves, to support racism, anti-Semitism and patriotism, to enshrine a dominance of men over women, and to condemn homosexuality as immoral.

He was a thundering black Baptist preacher and for much of his life a conservative Republican celebrity who wrote books about the Pilgrims, published volumes of sermons and presided at weddings and funerals of the rich and famous. He gave the benediction at President Ronald Reagan’s second inaugural and delivered the National Cathedral sermon at the inaugural of President George H. W. Bush.

At Harvard, Mr. Gomes was the Plummer Professor of Christian Morals at the School of Divinity and the Pusey Minister of Memorial Church, a nondenominational center of Christian life on campus. For decades, he was among the first and the last to address undergraduates, greeting arriving freshman with a sermon on hallowed traditions, and advising graduating seniors about the world beyond the sheltering Harvard Yard.

Then, in 1991, he appeared before an angry crowd of students, faculty members and administrators protesting homophobic articles in a conservative campus magazine whose distribution had led to a spate of harassment and slurs against gay men and lesbians on campus. Mr. Gomes, putting his reputation and career on the line, announced that he was “a Christian who happens as well to be gay.”

When the cheers faded, there were expressions of surprise from the Establishment, and a few calls for his resignation, which were ignored. The announcement changed little in Mr. Gomes’s private life; he had never married and said he was celibate by choice. But it was a turning point for him professionally.

“I now have an unambiguous vocation — a mission — to address the religious causes and roots of homophobia,” he told The Washington Post months later. “I will devote the rest of my life to addressing the ‘religious case’ against gays.”

He was true to his word. His sermons and lectures, always well-attended, were packed in Cambridge and around the country as he embarked on a campaign to rebut literal and fundamentalist interpretations of the Bible. He also wrote extensively on intolerance.

“Religious fundamentalism is dangerous because it cannot accept ambiguity and diversity and is therefore inherently intolerant,” he declared in an Op-Ed article for The New York Times in 1992. “Such intolerance, in the name of virtue, is ruthless and uses political power to destroy what it cannot convert.”

In his 1996 best-seller, “The Good Book: Reading the Bible with Mind and Heart,” Mr. Gomes urged believers to grasp the spirit, not the letter, of scriptural passages that he said had been misused to defend racism, anti-Semitism and sexism and to attack homosexuality and abortion. He offered interpretations that he said transcended the narrow context of modern prejudices.

“The Bible alone is the most dangerous thing I can think of,” he told The Los Angeles Times. “You need an ongoing context and a community of interpretation to keep the Bible current and to keep yourself honest. Forget the thought that the Bible is an absolute pronouncement.”

But Mr. Gomes also defended the Bible from critics on the left who called it corrupt because passages had been used to oppress people. “The Bible isn’t a single book, it isn’t a single historical or philosophical or theological treatise,” he told The Seattle Gay News in 1996. “It has 66 books in it. It is a library.”

Peter John Gomes (rhymes with homes) was born in Boston on May 22, 1942, the only child of Peter Lobo and Orissa White Gomes. His father, born in the Cape Verde Islands off Africa’s west coast, was a cranberry bog worker. His mother was a graduate of the New England Conservatory of Music. Peter grew up in Plymouth with literature, piano lessons and expectations that he would become a minister. He was active in the Baptist Church and preached his first sermon at 12.

He worked as a houseman to help pay for his education. After graduation from Plymouth High School in 1961, he attended Bates College in Lewiston, Me., a co-educational liberal arts school founded by abolitionists in 1855. He majored in history and received a bachelor’s degree in 1965, then earned a bachelor of divinity degree at Harvard in 1968 and was ordained a Baptist minister.

After two years teaching Western civilization at Tuskegee Institute in Alabama, he returned to Harvard in 1970 as assistant minister of Memorial Church. His first book, “History of the Pilgrim Society, 1820-1970,” was published in 1971. “The Books of the Pilgrims,” with Lawrence D. Geller, appeared four years later. In 1974 he was named Plummer Professor and Pusey Minister.

In clerical collar and vestments, he was a figure of homiletic power in the pulpit, hammering out the cadences in a rich baritone that The New Yorker called a blend of James Earl Jones and John Houseman. In class, he was a New England patrician: the broad shoulders, the high forehead and spectacles that tilted up when he held his head high, the watch-chain at the vest and a handkerchief fluffed at the breast pocket.

Mr. Gomes spoke extensively in the United States and Britain. In 1979, Time magazine called him one of the nation’s best preachers. While much of his later life was occupied by scholarly questions of the Bible and homosexuality, he came to abhor the label “gay minister,” and pursued a much wider range of studies, on early American religions, Elizabethan Puritanism, church music and the African-American experience.

He also continued to write. Besides volumes of sermons, his books included “The Good Life: Truths that Last in Times of Need” (2002), Strength for the Journey: Biblical Wisdom for Daily Living” (2003) and “The Scandalous Gospel of Jesus: What’s So Good About the Good News” (2007). In 2006, he became a Democrat and supported Deval L. Patrick, who was elected the first black governor of Massachusetts.