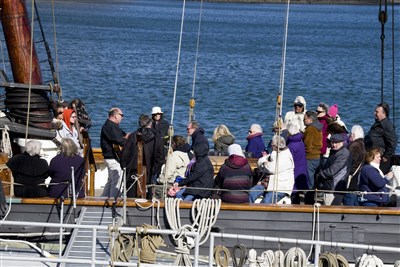 On October 21, North Branford Congregational Church took a creative approach to worshipping beyond their walls. Members of the congregation traveled to New Haven to worship on the Freedom Schooner Amistad in New Haven Harbor.

The Freedom Schooner Amistad is a replica of a Baltimore Clipper-style schooner, based on La Amistad, the historic vessel made famous by the 1839 rebellion of African captives who took over the ship, and the trial that took place after the ship was recaptured in the Long Island Sound. The modern vessel was built in the Mystic Seaport Museum’s Restoration Shipyard using many of the techniques and tools used to make 19th century ships. Since its launch in 2000, the ship has been operated by Amistad America, Inc., a non-profit organization that teaches the lessons of history and addresses racism with a goal of “building bridges of mutual respect and understanding.”

Members of the North Branford church spent a chilly and windy afternoon onboard the vessel, beginning with worship and followed by some educational programming. Originally planning to sail around the harbor, the schooner’s skipper, Captain Rose Witte, kept the vessel moored to the wharf due to gale warnings from the U.S. Coast Guard.

In his message, North Branford’s pastor the Rev. Vance Taylor made several connections between ships and the church, pointing out that the word nave – the central part of a church building – comes from the Latin word navis, meaning ship. The connection between the Freedom Schooner Amistad and the church runs deeper. He noted the dichotomy between the horror and injustice of the original La Amistad story and the positive message of hope the modern ship represents in its justice work. Taylor called this change from something “not so good at one time to something very, very good” the “transformational power of God.”

Following communion, thought to be the first communion ever shared onboard the new vessel, Taylor gave the benediction telling the congregation, as he often does, that the “worship is over. Now the service begins.”

“What better way to begin service than with learning about the history of this ship?” he asked.

Following worship, Taylor turned the program over to the staff of the Freedom Schooner Amistad. The ship’s educational staff gave two presentations: one on the history of La Amistad and the role of congregational churches in the 1839 events, and the other on the culture and talents of those Africans who were taken from their homeland.

“How often we can judge, without first gaining understanding and insight, leading to respect,” said Taylor after the days’ program. He said the two presentations were “great messages for our church, as we seek to challenge injustices and look to be welcoming and understanding of all.”

Laurie Vincent, a member of the church, called the afternoon aboard the ship “powerful.”

“Fellowship from the old friendships, the new relationships and stories we heard from the crew, and the worship we shared.  All those words ending in “ship” and being on a ship had to mean something. It did; the Lord brought me to a place of being shaped a little differently with the education I had just received about bringing to our lives the same need to be brave, hopeful and to triumphantly strive for unity in all human struggles.”

The church has plans for another visit to the ship in the spring with hopes that they may get a chance to sail the harbor next time.