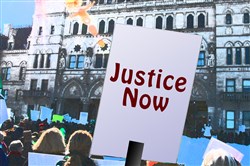 In response to the Presidential campaign rhetoric that so often targeted minorities and women, the Women's March on Washington is planned for January 21, the day after the 2017 Presidential Inauguration. Women across the nation have stated their intent to join this grassroots movement to voice their disapproval of the demeaning and divisive messages of the campaign.

"We stand together in solidarity with our partners and children for the protection of our rights, our safety, our health, and our families -- recognizing that our vibrant and diverse communities are the strength of our country," states national organizers of the event on their Facebook page.

A Connecticut Chapter of the Women's March has been organized to help those who are interested in joining the rally in Washington, D.C. One the volunteers helping to distribute information is Beth Kerrigan, a West Hartford resident and Town Council member.

"We need to be visible to those individuals who were marginalized through the rhetoric during the election season," says Kerrigan. "So those in power can see that we watch out for each other, that we all have each others backs."

Kerrigan, who has marched for causes twice previously, says marching helps energizes people and helps those who are marginalized feel like they are not alone.

"There's a lot of us," says Kerrigan. "I'm not alone. Because you feel very isolated."

Rev. Kari Nicewander, pastor of Immanuel Congregational Church in Hartford, is planning to attend the march because she understands how that isolation and fear feel.

"I am going for me. As a woman who is a survivor of rape, I have felt re-traumatized by the horrific words about women's bodies that I have heard from our president-elect. I need to stand with other women and other like-minded people and say that we will not give up. We will continue to fight against racism, sexism, heterosexism, transphobia, Islamophobia, misogyny, ableism, rape culture, and anti-immigrant hatred. I know what it is to be afraid and to feel my own being violated. I will march because I know how that feels, and I want to stand up against hatred, assault, and violence towards any group of people."

Information about rally times and buses traveling to Washington from Connecticut is available on the Women's March on Washington – Connecticut Chapter Facebook page. At this time, more than 70 buses have been schedules from towns all over the state. More than a dozen of these buses are already full. Organizers ask that anyone interested in reserving a seat do so by December 21. Kerrigan also states that there are local marches being organized for people who cannot travel to Washington.