The United Church of Christ has issued a new discussion guide for use by churches that wish to talk about the movie "Spotlight." The award-winning film tells the story of how the Boston Globe uncovered the massive scandal of child molestation and cover-up in the Boston Archdiocese of the Catholic Church.

The guide, which is available to download for free,  is designed to be used by churches interested in addressing ways to ensure that members of our faith communities are not vulnerable to abuse. 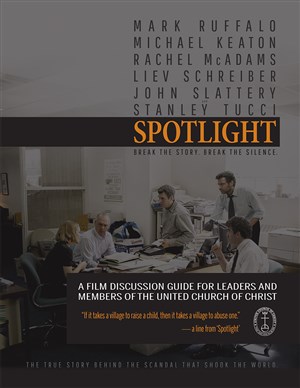 "'Spotlight' is indeed a cautionary tale for us all. While non-Catholics might be tempted to walk away from the theater with just a tinge of self-righteousness, assuming that this is a Catholic problem, don't give into that temptation," said the Rev. Marie M. Fortune, a UCC minister who heads the Seattle-based FaithTrust Institute, which is working to end sexual and domestic abuse. "The fact is that sexual abuse of children, teens, and adults by those designated as faith leaders is a serious and disturbing reality in every faith community. No exceptions."

The Spotlight movie, and the issues that it raises to national prominence, have a particular resonance in Massachusetts, where the scandal was uncovered in 2001 and 2002.  The scandal caused many people to cast a suspicious eye on all religious institutions, but then-Conference Minister & President Nancy Taylor countered that negativity by publicly advocating for a law to make clergy "mandated reporters" in cases where they suspected child  abuse. That law was passed.

The Conference also made headlines regarding the issue in 2001, when then-Associate Conference Minister Susan Dickerman was called to court to defend the decision to report a religious education leader in Worcester to authorities after he admitted to sexual abuse. He made the admission when a group of clergy and lay church leaders confronted him; his attorney argued that state law at the time prohibited clergy from revealing such information. The judge in that case sided with the Conference.

The Massachusetts Conference has also long been a leader in training churches to initiate safer church practices to prevent sexual abuse from occurring.

A wealth of resources can be found at macucc.org/safechurch, including information on the mandatory reporting law and on background checks in Massachusetts. There is also a video series from a workshop with former UCC General Counsel Don Clark, in which he talks about how churches can have safe conduct policies that include provisions should a recovering sex offender join the congregation.