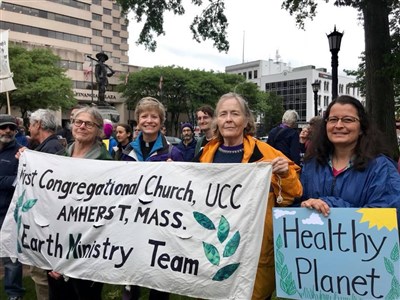 The Poor People's Campaign in Massachusetts moved to Springfield on Monday, June 4, where members of more than a dozen United Church of Christ churches (including First Congregational Amherst, pictured at right) participated in a rally calling on politicians to address the air pollution that makes Springfield the nation's worst city for people with asthma.

A total of 21 protesters were charged with trespassing on state property and issued summonses to appear in court at a later date.  They included Associate Conference Minister Kelly Gallagher, Sherrill Hogan from the First Congregational Church in Ashfield, Mary Friedman from First Church of Christ in Longmeadow and Russ Vernon Jones from First Congregational Church in Amherst.

The protest is part of the 40 Days of Action of the Poor People's Campaign. Learn more at:
macucc.org/poorpeoplescampaign