Survey: Moving Worship and Other Programming Online is Working Well for Many Churches

Survey: Moving Worship and Other Programming Online is Working Well for Many Churches

5/29/2020
Share
The Conference recently conducted a wide-ranging survey of churches, in which 260 churches participated. This is the second article in a series looking at the results, and  looks at how churches were able to shift worship and other programming online.
The first article looked at the financial situation of churches.
The second looked at how clergy are faring.

Within the first few weeks of “Stay Home Stay Safe” orders, many of our clergy had not only figured out how to deliver worship to their congregations, they had also experimented with more than one modality in order to do so.  Our question was not forced choice, so in a number of cases respondents named more than one of the options. 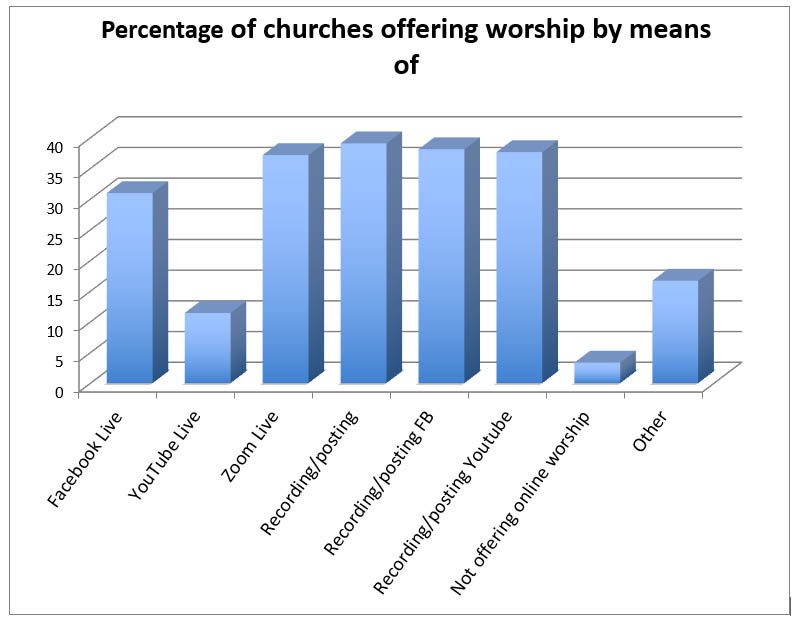 Among the other worship delivery modes mentioned were Vimeo, Go to Meeting, livestreaming via a private hosting company, and using Soundcloud for audio only.
A number of churches are already broadcasting via cable television and continued to do so.  A few clergy created worship packets that were sent home by email, sometimes to accompany video resources, and sometimes as stand alone. Zoom was specifically named as a tool that enabled more interactive approaches to worship and a number of churches use is for after church fellowshipping.
Remarkably, these approaches seem to have garnered increased worship engagements.  While we did not request our respondents to check against historical numbers (in the interest of making the survey easy and quick), many felt that numbers were up.  Amongst those who knew how to track hits vs stays, a yet larger percent reported an increase in worship engagement. 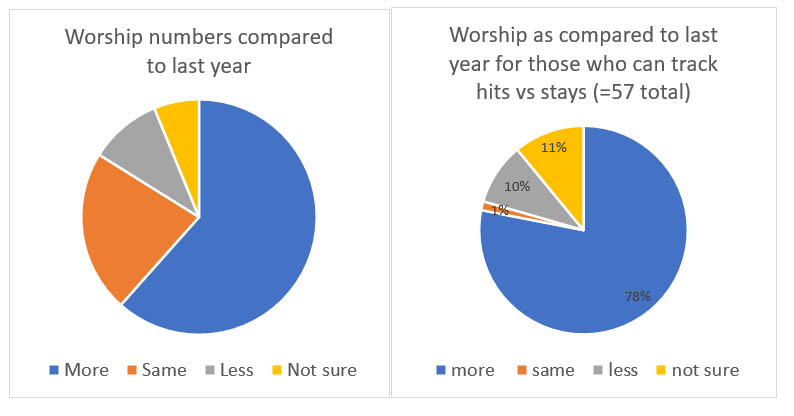 Our respondents are also using technology in multiple ways in order to offer other church engagements.  This was not a forced choice question, so respondents were able to check several boxes.  Only 38 of the 255 respondents indicated that they were offering no midweek programming. 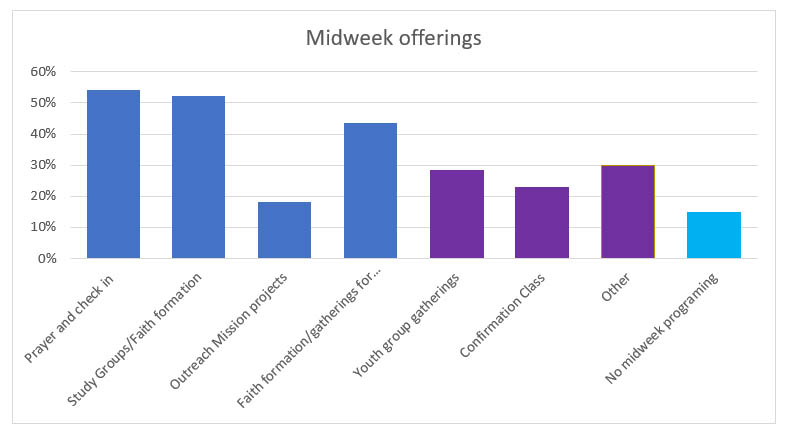 In the comment section, many noted that business meetings of the church were also being held mostly by Zoom.  A few noted the enduring lesson here: Zoom meetings a great alternative when there's a snow storm, noted one pastor.
Some really creative programming was surfaced in the comment section.  A few of these are:
The use of technology for experiences other than Sunday worship may have as much if not more staying power than Sunday online worship.    What is clear is that clergy are trying it out and congregations are adapting. Indeed, in another section, clergy noted--with pleasure--the congregation’s willingness to not only adapt but also support such changes.  Clergy made comments such as:
While many clergy have felt the support of their congregations, a few noted that the crisis has enabled change in a way that we might not have thought possible.  Wrote one pastor:  The modernizations I and a handful of others have been advocating for years (which have been pooh-poohed) will start to take place.