SPOTLIGHT: Three Churches with a History Hold a “Family Reunion”

SPOTLIGHT: Three Churches with a History Hold a “Family Reunion”

Veterans Benefit from the Event

As you may have read, in January 2017, the Boards of Directors of the Connecticut, Massachusetts and Rhode Island conferences on Saturday voted unanimously to commit to come together to make an impact as people of faith. Three entities coming together in faith, fellowship, and mission is something which is very familiar to the United Church of Christ in Abington, First Congregational Church of Rockland and the First Congregational Church of Whitman, who all joined together last month in a special mission project.

You could say it took 200 years to prepare for the event.  In the early 1800s the United Church of Christ in Abington made a natural split because the church was too large and people were travelling far distances.  Out of that church two new congregations were formed which eventually became the First Congregational Church of Rockland and the First Congregational Church of Whitman. In 2015, they celebrated their history by throwing a joint ‘Family Reunion’ worship service at the original Abington location.

The service was attended by about 250 people from all three churches and folks loved it so much, the three churches decided to do it again – in Rockland in 2016 and in Whitman in 2017.  “We are trying to rotate churches so everyone feels at home,” explained Rev. Kristy Coburn from the United Church of Christ in Abington. 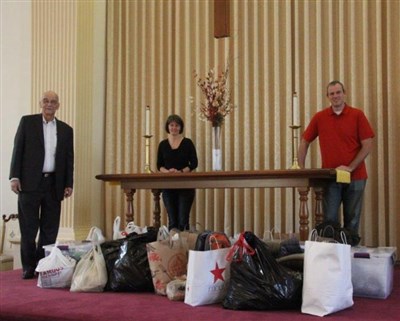 The most recent worship service focused on mission and outreach.  Lay speakers discussed the ministries in which they participated -- like Lenten suppers, homeless shelter meals, prayer shawl ministries, and youth community events -- and shared why these ministries were so meaningful to them.  Since the mission theme was so important to all three churches, the pastors decided to continue the discussion and have their churches join together on a special mission project.   A few months later a  potluck dinner was held during which ideas were brainstormed and plans were formed.

“We mixed up the members so churches didn't sit together, and had discussions about our various mission works, their importance, and why we are called to do mission work in the first place,” said Coburn. “Then Rev. Josh Gray (of the First Congregational Church UCC in Whitman) guided us through some conversation and reflection on Mission as we brainstormed a mission that we could all work on together.”

Since the idea of helping veterans seemed to be a common theme among the groups, the team decided that during the month of January, each of the three churches would collect items for the VA hospital in Brockton. Coburn is a veteran and her husband (who is also a veteran) works for the Veterans Health Administration, so they were able to easily connect with the hospital personnel and explore its needs. 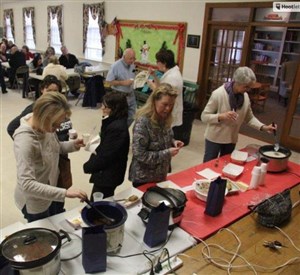 The team printed the patient wish list posted on the hospital website, and distributed it to the members who collected items at their own churches.  Then at the end of January the three churches held a "Chili/Chowder Cook-off and Dedication of Gifts" where the gifts were gathered, blessed, and organized for delivery. Over fifty people attended the Sunday afternoon event.

“We hoped that these simple gifts of comfort given by all three of our churches would serve as a reminder to the veterans of God's unending love, care, and compassion for all of humanity,” said Rev. Alan Copithorne of the First Congregational Church UCC of Rockland.

“When we got together for worship in September over in Rockland, the idea was to listen to some of the mission projects that our churches already engage in and then to imagine what we could do together, and do it." said Coburn.  “We chose to make a difference by giving gifts to the ‘least of these’ who belong to our family.  And we did it together.”


You can contact Rev. Kristy Coburn at the United Church of Christ in Abington office at
(781) 878-0199 or abingtonunited@gmail.com. See their Facebook page at https://www.facebook.com/uccabington.