Church of Christ, Congregational in Norfolk, is located in a quiet little town in the northwest corner of Connecticut.  Rev. Erick Olsen, pastor of the Norfolk church, says the church is located in a little corner of the state;  a little "white" corner, to be more precise.

This fact prompted Rev. Olsen to look for ways to get his church more involved in racial justice and the work of eradicating racism. But he did not want the church to do this work by itself.

"I believe [eradicating racism] is only possible through the work of relationships," he says.

So, Rev. Olsen contacted a colleague, Rev. Shelly Best, pastor of Redeemer's AME Zion Church in Plainville, CT. Best grew up in Norfolk and had personal experience of what it is like to live in a predominately white town as a Person of Color. Together, they planned for the two churches to offer discussions on racism between members of their two churches.

The groups met several times for these conversations. They began with books, reading and discussing Austin Cheney Brown's I'm Still Here: Black Dignity in a World Made for Whiteness and The New Jim Crow by Michelle Alexander. The discussions moved to films. The groups watched 13th, a documentary on race and mass incarceration; Cooked: Survival By Zip Code, a documentary about the racial disparities in disaster preparedness, and Pushout: The Criminalization of Black Girls in School, a film based on the book of the same name by Monique Morris. After the pandemic shifted the discussions to online, the work in Norfolk continued with an in-house program led mostly by youth leaders. This program focused on the representation of People of Color in media, and environmental racism.

The "Collaboration" as Rev. Olsen and Rev. Best call their partnership, has become a very powerful part of the churches' faith communities. And Rev. Olsen has found it equally inspiring.

"It's one of the most powerful and transformative projects that I've been involved in in 18 years," he said. 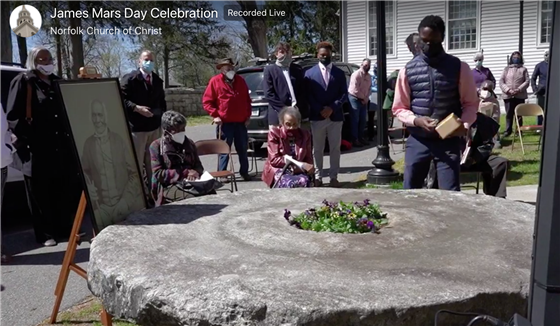 Another racial justice project involving the Norfolk church was a Witness Stone project centered around James Mars. Mars was a young Black man born to enslaved parents in Canaan, CT in 1790, and sold to a Norfolk slave owner. He eventually bought his freedom and later became a leading abolitionist and author. Mars was also a member of the Norfolk Church before moving to Hartford and joining the Talcott Street Congregational Church (Now Faith Congregational Church UCC). The Norfolk Witness Stone project originated with a local teacher at the Salisbury School. In a ceremony on May 1 dedicating the Witness Stone at the church, Rev. Olsen said these words:

"I want to be clear, we are here to bear witness to the story of James Mars, a story that deserves and needs to be told, heard and shared. Today offers us an opportunity to engage a painful chapter of our history in order to make it possible for us to keep striving toward the peace that comes only with justice."

The Collaboration between the Norfolk and Plainville church has generated some energy in the area of justice among members of the Norfolk church. Rev. Olsen says there is an emerging group of people who are interested in forming a Social Justice Team at the church. And another project has emerged from the Collaboration that involves several local artists and businesses. The church is planning to place several Adirondack chairs outside the church. These chairs will be painted in varying skin tones, based on some research done by Rev. Best, who is herself an artist. Once the "skin-toned" chairs are painted and placed, Rev. Olsen says they plan to incorporate a series of signs that read "God sees and loves every color, and so do we."

You may reprint this story by including the following line in your article:  Reprinted with permission from Southern New England Conference, United Church of Christ, Spotlight

How is Your Church Living the Love & Justice of Jesus?

Tell us how your church is making disciples of Jesus, making God’s love and justice real, bringing new life as agents of change or doing mission and ministry through covenant partnerships. Share your story and help us to spread the good news!
Contact Drew Page.