6/23/2021 - by: Drew Page - Church Innovation Justice and Witness Spotlight
Share
At First Church of Christ in Sandwich, MA, Juneteenth provided an opportunity for the church to educate the people of Sandwich about the role of slavery in this predominantly white community on Cape Cod. 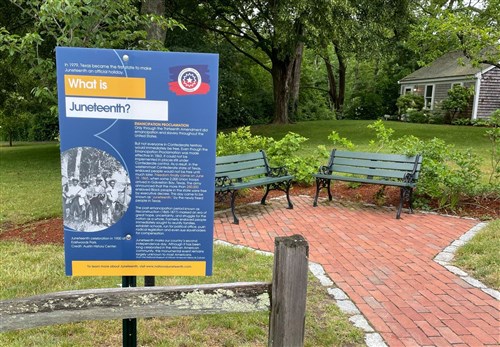 The Juneteenth project at FCC Sandwich began with funds left to the Calvinistic Congregational Society (which eventually merged to become First Church) over 200 years ago by Titus Winchester, a man enslaved by a local pastor and later freed. FCC Church was looking for ways to honor and educate the community about Juneteenth and tell the story of Titus.

"Titus is such an integral part of our church's history, and such a fascinating person. We wanted to really uplift him and his story, and share the message of equality and justice through the community," said Rev. Tina Walker-Morin, senior pastor at FCC Sandwich.

The church, in partnership with other members of the Sandwich community, decided to create 8 signs that could be placed around the community where people are likely to walk. The 24x36 signs show information about Juneteenth in Massachusetts, Juneteenth in general, and three individuals: Titus, Joseph Wilson – a former enslaved man and veteran of the Union Army during the Civil War who later lived in Sandwich, and Rev. Joseph March – and abolitionist who lived in Sandwich in the 1830s.

The signs have no information about who created and posted them. This anonymity was intentional.

"So often today, people will receive information only if it comes from specific outlets," said Rev. Jennie Valentine, Minister of Faith Formation and Service. She said leaving the information anonymous could help readers keep their minds more open to the information.

The signs were up for only 9 days due to signage rules in Sandwich requiring special permission from the Board of Selectmen.

Walker-Morin and Valentine both feel that educating the community is important. Sandwich is a predominantly white community with only about 1% of the population consisting of Black, indigenous, or other people of color. The story about Titus was familiar to many in the community, but according to Rev. Walker-Morin, it has been "whitewashed." For many years, she heard the story that Titus was freed upon the death of Rev. Williams. After doing some research, she found that Titus was actually willed to William's wife who took him to New Hampshire when her husband died. She later freed Titus, and he returned to Sandwich before his died.

In addition to the educational signs, the church created a Facebook page called "Sandwich: Who Knew?" which aims to help the community learn more about its history and roots together.

The Juneteenth efforts were part of the church's ongoing racial justice work. Rev. Walker-Morin hopes that the ministry will continue to grow, and branch further. She hopes that they can repeat the effort next year, but she would like to see the signs used by other groups, especially the schools. And there is hope that the ministry widen as well to other topics of injustice.

"This may grow into other ways we can amplify the voices of people whose voices are silenced or marginalized," said Rev. Valentine. 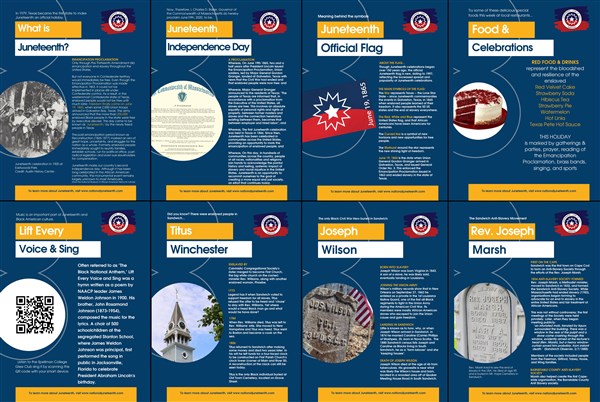 You may reprint this story by including the following line in your article:  Reprinted with permission from Southern New England Conference, United Church of Christ, Spotlight

How is Your Church Living the Love & Justice of Jesus?

Tell us how your church is making disciples of Jesus, making God’s love and justice real, bringing new life as agents of change or doing mission and ministry through covenant partnerships. Share your story and help us to spread the good news!
Contact us:Drew Page.