Fourth of July fireworks and parades usually generate a lot of noise and attention.  This month Memorial Congregational Church, UCC, Sudbury (MCC) used the opportunity of the town's parade to make some noise and draw attention to the "Be the Church" message.

Church members created a float that was a replica of the church building -- complete with a detailed steeple and bell tower, and a rainbow flag.  Marchers accompanied the float with handheld signs highlighting the individual statements from the "Be the Church" banner that is also displayed in front of the church.

"We had to find a way to combine the parade's theme, 'Celebrate the American Dream,' with the message we wanted to share about our church," said Pastor Tom O'Brien.  "I was planning to preach a sermon series on the UCC's 'Be the Church' campaign so the members wanted to highlight those statements.  We had recently placed a banner on the outside of the church and we felt the words spoke to who we are as a church."

Eight people worked about 20 hours to design and build the float over two weekends.  Many hours went into creating the octagonal bell tower out of cardboard and the weather vane out of tinker toys. Costs were fairly minimal as the team tried to use materials that were around or donated.  A pop-up tent was purchased, but will be used for other church events. Flowers were added as a finishing touch. 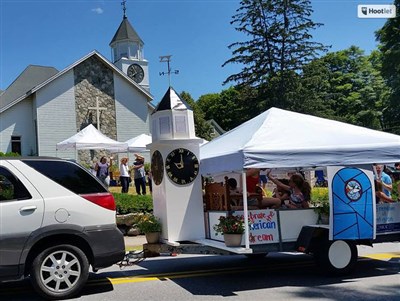 Eleven adults marched with signs, while an additional eleven children rode the float or marched with the adults.  All along the route, parade goers recognized the church and made many positive comments about the banner statements that included "Care for the Poor," Protect the Environment," and "Forgive Often."

Many in the community were then able to connect the 'Be the Church' message to the congregation. "There were remarks from some that the statements were powerful while others expressed that they were glad such a church was in their town," said O'Brien.  "Our message seemed very well-received."

Members of the church felt that it was important to seize this opportunity to let the town know what their church represented.  "While much of the media portrays Christians as anti-LGBT or Christianity as a list of 'Thou Shall Nots,' we wanted to show that MCC, and the United Church of Christ, believe that we are called to speak out for the oppressed and lift up the lowly.

"This was a fun way for us to share the gospel as we understand it."

You can reach Pastor Tom O'Brien at the church office at 978.443.3885, or by email here:  http://www.mccsudbury.org/contact/, or visit their Facebook page.  You can see additional photos of the parade in their July/August 2016 newsletter .