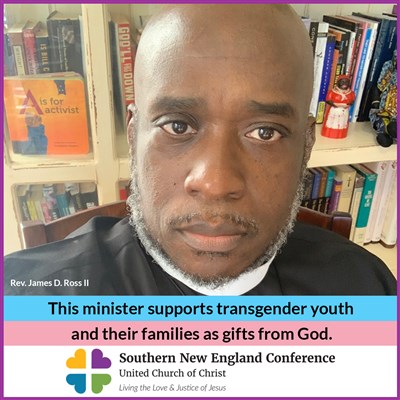 A dozen authorized ministers on staff at the Southern New England Conference are demonstrating their support of transgender youth and their families after Texas made it illegal last week for health care providers and parents to provide their children with hormone replacement and other gender transition therapies.

The ministers, who serve in a variety of roles, are part of a social media campaign the Conference has launched. Each minister is wearing clerical garb and appears in an image that includes the words, “I support transgender youth and their families as gifts from God.”

The campaign comes after Texas Gov. Greg Abbott called on the public and certain licensed professionals (many of whom are considered mandatory reporters in cases of child abuse) to report the parents of transgender children if "it appears" the child or teen is receiving gender-affirming medical care. Based on an opinion issued by the Texas Attorney General, it is now considered child abuse to provide these services, and a crime for people not to report it.

“This move by politicians in Texas is discriminatory, abusive, and a violation of human rights,” said Rev. James D. Ross II, Minister for Diversity, Equity, and Inclusion. “It also could imply that transgender youth are somehow separate from God’s love. Our visibility as clergy people is an important act of public witness and solidarity that we believe is consistent with God’s call to justice and the commitments of the Southern New England Conference as we seek to be a church that is relevant, prophetic, and transformative.”

See more of the images in this gallery

SNEUCC clergy who would like to use the graphic are invited to do so. Download a blank version here and add your own picture:
(Right click on link and Save Image As or Save Link As.)


How to use the image frame using Canva: