6/7/2022 - Making Disciples
Share
Starting with last month's edition of our Discipleship Matters newsletter, SNEUCC's Faith Formation team will be showcasing the good works and best practices present throughout the Southern New England Conference of the UCC - and now beyond! If you're interested in having the work of your church, religious institution, or para-church organization showcased next month, please reach out to Faith Formation Program Support Associate Sean Amato for more details. 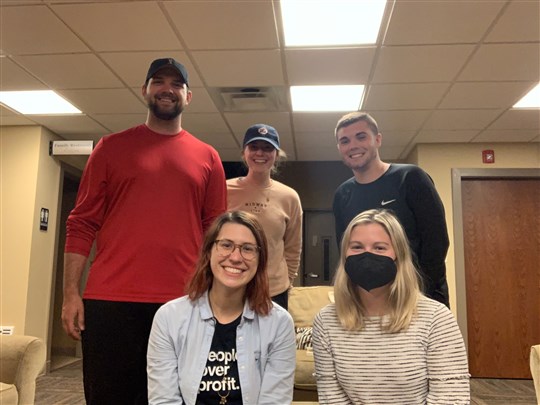 This month, our Spotlight on Service is on St. Luke's Young Adults - a ministry of St. Luke's UCC in Jeffersonville, Indiana. Coordinated by Emily Carle, Pastor for Young Adults and Mission and SNEUCC transplant, St. Luke's Young Adults represents a valuable example of how a region's churches can bring together its young adult population for the purposes of healing, community, and Christian empowerment. The group's regular activities include volunteer work, Bible study, community engagement, and monthly worship.

For Emily, a UCC Member in Discernment who is taking courses toward her Masters of Divinity at Louisville Presbyterian Theological Seminary, time spent in the Mid-South has enriched her understanding of how UCC churches "work" in different parts of the United States. I had a chance to interview Emily during her summer break, and it's clear that she has an important message for faith formation leaders in SNEUCC.

Sean: Starting from your time in the historic Connecticut and Massachusetts conferences, what's led you to your ministry?

Emily: I started at Center Church UCC in Hadley, Massachusetts with Pastor Lori. Earlier in my life, I'd fallen off the "confirmation cliff" and felt like something was missing in my life. I wanted to get back into things. After I started classes at Mt. Holyoke, I attended service at Center Church and just immediately became a member. Eventually, I was offered the temporary role of Youth Director; I wrestled with the idea but ended up taking the position, and fell in love with both youth work and church work. I felt very creative in the position, and through the work was able to see how all of life's little intersections were at play in today's church. At the same time, I was trying to discern what my major at Mt. Holyoke should be and, in time, I settled on Religion/Religious Studies. I began to recognize that the church is a vehicle for so many different types of gifts and skills - which makes sense, considering the church is the body of Christ! I opened myself up to lots of new opportunities at the church, and had a lot of great support from Pastor Lori and other women leaders in the community. I said "yes" to nearly everything.

Sean: So what led you to seminary?

Emily: I wanted to get out of New England. I still love it very much, but I lived there my whole life. I knew that this might be one of my only chances to live elsewhere for an extended period of time, and I wanted a chance to experience life and culture in a different part of the country. After all, "you don't know what you don't know". Louisville Seminary was recommended by an alumnus, and I found the ideas of seminary and missional practice attractive: antiracist work is central to Louisville Seminary, and the institution is both affirming of women in ministry and LGBTQ+ people in ministry. The community here has been incredibly supportive for me, and I've had some serious opportunities for personal growth.

Sean: Can you tell our readers a bit about the UCC in Kentucky and Indiana?

Emily: The UCC as a whole is different here in Kentuckiana. Congregations are very much driven by local Evangelical and German histories, as opposed to New England's Congregationalism. Churches are smaller, and fairly grassroots - people wear lots more hats in church environments, and few specialize in any one specific thing. As there aren't as many UCC churches in the region, it's a tight-knit community. By nature of being both a smaller group locally and a pretty progressive one for the Bible Belt, the local UCC has to be unified be necessity - something I think we take for granted in New England. In New England, the UCC is the norm, or a given; it's the exception down here.

Sean: Your work with St. Luke's Young Adults - what's that like?

Emily: The local conference put out a grant for emerging ministries that would include the 30-40 local young adults around which a bigger effort could evolve. After the position was broadcast publicly and to my seminary, I applied and was brought on as the coordinator. The group is small, but active. In our weekly Bible study, we've gone over subjects ranging from the Beautitudes to unclobbering the "clobber passages". We've helped prepare young Christians as to how they can respond to and engage with non-affirming individuals and theology, and have even done assessments of scripture in Hebrew and Greek. Currently, we're reading Inspired: Slaying Giants, Walking on Water, and Loving the Bible Again by the late Rachel Held Evans. Once a month, we have a worship service. We also engage in regular mission work, and regularly volunteer at St. Luke's soup kitchen. We also go out for fun activities, as well: Theology on Tap, going out to dinner as a group, and attending the Southern Indiana Pride Parade & Festival are just some of our recent outings.

Sean: What would you say your group brings to its participants?

Emily: My young adults are so kind. They support one another as we discuss our faith and understanding of God and Christianity, non-judgmentally. Several participants were members of more conservative denominations and churches prior to their engagement with the UCC; as a result, there's a lot of unwrapping of hurt and chances for healing. Healing for them is unlearning bad theology, in order to find something that's fruitful and life-giving. You can almost see the relief on a participant's face when they realize what certain verses in Greek or Hebrew actually mean, or how people might understand violence in the Bible differently than what they'd been previously taught. In time, their faith might finally become something comfortable - not something they have to be at war with, or something with which they have to be at odds.

Sean: As a seminarian in Kentucky/Indiana, what message might you have for folks in Southern New England?

Emily: We take a lot of things for granted. We have a great setup, we have numbers, and we have resources. We're part of a progressive, privileged church in a progressive, privileged regional bubble. It's really important for folks in Southern New England to develop an understanding of the struggles faced by the rest of the country, and how pastors in those areas balance their work - what it's like to have congregants who are more moderate mixed in with progressives, and how to serve all of them. We mischaracterize people who live here. If we're to be the United Church of Christ and create a just world for all, we may need to put ourselves in uncomfortable positions to do that good work. I believe a good minister is one who has varied life experiences, so I specifically removed myself from my liberal enclave - which I miss very much - in order to grow personally, culturally, and theologically.

Sean: On that note, do you have a message for folks who do faith formation work in Southern New England?

Emily: It's tough. I see you. Youth ministry is, frankly, the hardest ministry that's out there. You're often doing thankless work, tracking down people, doing weird things like buying fifty boxes of Rice Krispie Treats. I appreciate you. You're very special. Please, just don't play the comparison game between youth ministry and adult ministries or other forms of faith formation. Everyone's church context and community context is different. It's great to bounce ideas off of one another and learn from one another, but don't unfairly compare your numbers to your neighbor's numbers, or your ministry to somebody else's ministry. Instead, try to form authentic intergenerational and inter-church relationships with those peers. John Wesley said, "do all the good you can, by all the means you can." As long as you're doing your best to meet needs and people are being filled spiritually, that's all that matters.

The Faith Formation team would like to extend hearty thanks and congratulations to Emily Carle and the Young Adults of St. Luke's UCC for their good works and ready engagement with their faith. How is your church putting faith into action? Share your stories with Program Support Associate Sean Amato, and you may just be spotlit in the next issue of Discipleship Matters!