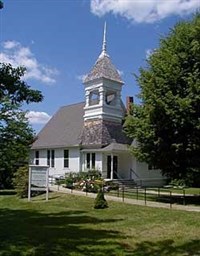 In West Woodstock, Connecticut, a small village in the town of Woodstock in the northeast corner of the state is the equally small church, the Church of the Good Shepherd. Their pastor, The Rev. Alice O'Donovan, says the average attendance in worship is between 20-25 people, consisting of 8-10 families. This includes the pastor and volunteer music director. Their official membership numbers top out at 30.

So it's quite surprising to hear that this tiny church was able to eliminate $101,000 in medical debt through their offering to the RIP Medical Debt program.

O'Donovan says the church's collection of $1010 was a huge accomplishment. As a regular practice, the church collects a special offering on the fifth Sunday of months that have one. In prior 5th Sunday offerings, the church raised between $250 and $300 dollars often designated for some specific mission.

So why the increase in giving this time?

O'Donovan says it was "all the bricks coming into place at the same time."

First, the 5th Sunday offering had not happened in November and August, the last two times a month had five Sundays. O'Donovan was on leave and the offering was never taken in those months. When she returned, she looked ahead to February's fifth Sunday. The RIP Medical Debt program was in the news and the movement was growing. The Southern New England Conference was challenging churches to contribute to the RIP Medical Debt program, looking to get 100% participation from churches. It was a perfect opportunity for to engage in this mission.  (​As of April 24, $80,262 has been raised - find out more.)

And the church had people who would be passionate about the subject of medical debt. O'Donovan shared one story of a family whose adult son had been struggling for years with medical debt and had only recently seen some relief.

The RIP Medical Debt program is a nationwide effort to reduce the estimated $1 Trillion owed by Americans for medical expenses. To date, the organization and its partners have abolished over $1.3 billion in debt. Learn more about this non-profit program here.
So O'Donovan wrote a letter to her congregation, something she was not in the habit of doing. In it, she appealed to their sense of impact and a "very good deal". The RIP Medical Debt program has an astounding ration of 1:100 impact. For every $1 raised, $100 dollars of debt can be eliminated. Every $100 retires $10,000 in debt.
"What an investment ratio!" wrote O'Donovan in her letter.  "100 bucks does 10,000 bucks worth of good for people in the poorest communities of our conference."

O'Donovan even offered a gift to start, and challenged the congregation to join her.

It worked. To date, the church has raised $1010 for RIP Medical Debt, which will eliminate $101,000 in medical debt for people who are crushed with medical bills they cannot pay. That's an incredible number for a church of less than 30 people and an annual operating budget under $30,000.

Imagine if every one of the 120,000 members of 605 church in the Southern New England Conference gave $30. That $3.6 million. It would eliminate $360 million in medical debt. Here's another perspective. If all 605 churches matched West Woodstock in offering $1010, the debt eliminated would equal over $60 million dollars.

“This is a moving example of leadership encouraging generosity," said Rev. Kent Siladi, Bridge Conference Minister of the Southern New England Conference. "Alice O’Donovan demonstrates how leaders can inspire others through personal acts of kindness.  We are so grateful for this church’s inspiring response to this Conference-wide justice initiative.”