As participants arrived, they unloaded bags of donations: toiletries, socks, and gently used warm clothing. They worked together to prepare a nutritious hot meal.  First, however, they spent time learning about homelessness in southeastern Connecticut.

Ofner-Seals began by asking: “Who is homeless in the city of New London?” The group supplied these responses: Those who have lost their jobs, LGBT teens, people who are dealing with addiction, those with mental or physical illness, and victims of abuse.

“The Homeless Hospitality Center in New London has 50 beds but often accommodates 60 or 70 persons," Ofner-Seals said.  "Last year it served 600 unique individuals.  Over half were struggling with mental health concerns. Our average age is 31-50 years. Most have a high school diploma or GED. Sixty percent are male and 72 percent are white.”

Ofner-Seals’ vision is to put a human face to the homeless population in Connecticut.

"We sometimes make judgments about the homeless population," she said. "I am looking to break down stereotypes. This can happen when people sit down together and share stories.  We grow closer when we engage in the sacred ritual of breaking bread together.  Our faith tells us to welcome the stranger.”

The guests were greeted warmly as they arrived.  Then the group said grace and sat down to a delicious meal prepared with love.  Conversation was friendly and open.

“I was impressed with how some of our more introverted guests were laughing and talking freely by the end of the night,” she said.

After the guests left, the volunteers circled up to share reflections.  Some named a feeling of gratitude, and connectedness. Others were inspired to do more.

“I realized many people are just a paycheck away from being in the same situation,” said Samm, from Griswold.

The program reminded everyone how important it is to treat one another with dignity and respect.

One of the speakers who was formerly homeless commented, “So often people act as if we are invisible.  If you want to know how to help, just treat us as human beings.  Simply ask, ‘Are you okay?’ and ‘What do you need?’”

This educational outreach program is supported by a grant from Neighbors in Need.  Though this was only the second gathering, Rev. Ofner-Seals envisions offering a program every other month. Contact her at sofner@gmail.com for more information.  To learn how to support the shelter, go to Homeless Hospitality Center.

Debby Kirk is the Director of Youth and Young Adult Ministries for the Connecticut Conference, UCC. 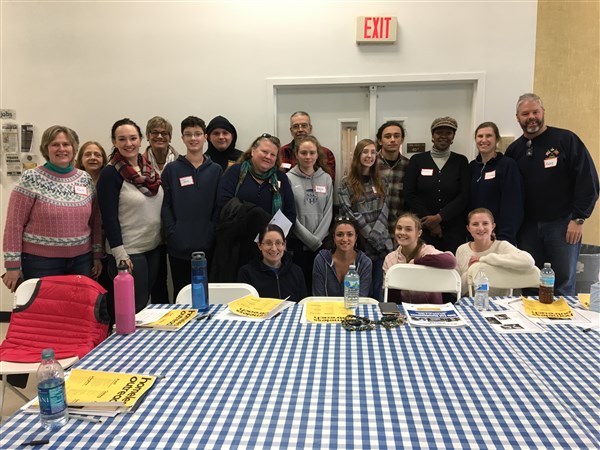