In Plymouth County, there have been 1,118 opioid-related overdose deaths since 2000, as reported by the Massachusetts Department of Public Health. The more frightening statistic is that that number climbed from 23 deaths in 2000 to more than 185 in 2016. These numbers do not include heroin or other drug or alcohol related deaths. These numbers do not include the thousands of people who overdosed but were saved by antidotes or other first response efforts.  People in this part of the state, like so many across the Commonwealth, have growing concerns about this upward trend.

It may have been providence that brought the Rev. Dr. Robert A. Everett to The Second Church of Plymouth UCC, Cong. as its settled pastor in 2014.  Everett ‘s prior church in White Plains, NY, was dedicated to helping those who were fighting addiction and every year held a Recovery Sunday worship service on the last Sunday in September.  He introduced that tradition to Plymouth.

September is National Recovery Month, a month dedicated to increasing awareness and understanding of mental and substance use disorders and celebrating the people who recover. The Recovery Sunday worship is designed to help the church begin to talk about the problems of addiction and to help make the church a safe and welcoming place for anyone affected by these many problems. 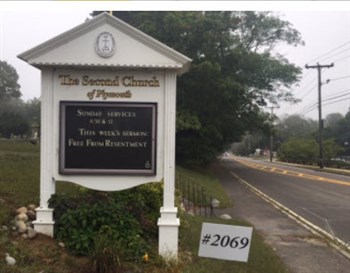 “It centers on the healing grace of God, and gives strong emphasis on how God accepts us as we are,” said Everett.

The church promotes the worship service through flyers, multi-media, newspapers articles and word of mouth. Second Church also became involved in project  #2069, a campaign that place signs with #2069 on them across the state. 2069 was the number of overdose deaths on Massachusetts in 2016.  The signs are not intended to be simply a memorial to those lost but a call for deeper awareness of this epidemic in our midst.

Second Church has found additional ways to reach out to the addicted besides the worship service, from providing addiction Anonymous group meetings six nights a week to collecting food and clothes for the needy.

“It is common that homelessness, hunger, and addiction are often found together,” said Everett. “It is like a never-ending circle of despair.”

Consequently, once a month parishioners venture out to feed and distribute clothes to the homeless in Plymouth, as well as walk around Boston and give people on the street food and clothing. They also provide Bibles and cards with a list of resources for those seeking help and shelter. During the winter, teams of parishioners help to feed the homeless hot meals at two churches in town. There is a food pantry at Second Church which is being used by a growing number of local people; Plymouth Synagogue partnered with them to supply diapers for the pantry. Plans are underway to collaborate on additional programs with a rehab facility in Plymouth.

These programs outside the church walls help to give meaning to the special worship service that happens inside the walls. On one Recovery Sunday, a member of one of the Anonymous groups stood up and thanked the church for the invitation and the service. Then he said, “It’s the first time I have come through the front door of a church.”  For Everett, that was one of the saddest comments he had ever heard.

Everett believes this is the time for churches to shed the judgment often leveled at people sick with the disease of addiction and ruthlessly root out the evils of stigma and shame.

“The Biblical basis for Recovery Sunday is clear,” explains Everett.  “Jesus says in the Gospel of Matthew, ‘whenever you fail to help any of my people, no matter how unimportant they seem, you fail to do it for me.’ (25:45). People in addiction are stigmatized and shamed. They are often shunned. They appear to many in society to be expendable people. No one is expendable in the sight of God. Recovery Sunday worship services attempts to reinforce this idea. The services are simply one way to put the love and grace of God into action in the world. It is a simple act of radical hospitality and love.”

You can read more about this subject in Rev. Everett’s blog article.  You can also contact him at the church office at 508.224.7220  or email secondchurchplymouth@verizon.net.