SPOTLIGHT: Rapping Up the Christmas Story

SPOTLIGHT: Rapping Up the Christmas Story

If you are a theater enthusiast, you are probably familiar with Broadway’s newest hit, Hamilton. This popular hip-hop musical brings history to life in a modern way.  The actors ‘rap’ their lines as they tell the story of Alexander Hamilton in a way that engages today’s audience.

Telling an old story in a new way was what the First Congregational Church UCC of Saugus had in mind when it held its annual Christmas Pageant last month and offered the community an updated version of the story of Jesus’ birth.

"If I'd only known who was at my door, I'd have given them my best rooms and more.
Who'd have guessed this humble family would be the hope for all humanity?
I'll never forget that night of awe, When Jesus came to earth as the Son of God."

The percussion for the "Hamilton" -style rap was provided by Ayo Osude, a young Nigerian-American man whose spirited playing of tambourine and bongo was infectious. “Attendees of all ages got up and danced to his beat,” said Stroshane. “It was hard not to.” 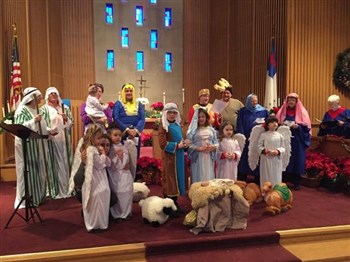 The style of music wasn’t the only unusual aspect of the church’s pageant.  During the play, spitting accompanied the rapping.   A cast member, dressed as a Camel, carried a squirt bottle of (clean) water to "spit" on the people he passed. Many of the attendees thought he stole the show.The modernized story, updated with beats and humor, brought a new enthusiasm to cast and crew, and that energetic performance helped keep the crowd engaged.

“I've been floored by the way American history has come to vibrant life in ‘Hamilton,’ said Stroshane.  "As a songwriter, I often set Psalms and Scripture stories to music for our Sunday worship, so this seemed a fresh approach to the familiar Nativity story. I tried to step inside the human aspects of the story, but remain reverent.  I felt that it would make a lasting impression on the kids in the cast.”

Stroshane heard many comments from the church folks that it was one of the best pageants they have seen.

“It is important for the church to tell our ancient stories in fresh, new ways,” explained Rev. Martha Leahy, pastor of the Saugus church.  “Performing the Christmas story in rap, to me, is the same as translating the Bible into all world languages, or writing the story with a particular audience in mind, as did the gospel writers.  Our intent was to use a popular, modern language – rap – to express the beauty, wonder and spirituality of Christmas for a new audience.  We hope The Innkeeper’s Rap helped people see and hear something new and exciting in this ancient, beloved story.”

Stroshane has offered her original play for free to other churches. You can contact Stroshane at the church office at 781-233-3028 or email uccsaugus@verizon.net.  You can see a video of the performance below or on the church Facebook page. (Here's a link to the full video on YouTube, including an introduction of Scripture by Rev. Martha: https://youtu.be/8msGrtM2o_o)