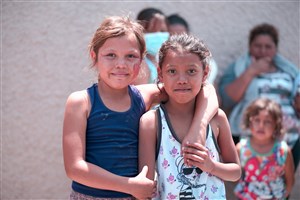 Are you involved in planning for the sudden arrival of migrants? Would you like to be? The Southern New England Conference and the Immigration, Refugee, and Asylum Task Team want to hear from you so that we can work together.

Background: On September 14, about 50 migrants arrived unexpectedly in Massachusetts. They were sent to the island of Martha’s Vineyard on a flight from Texas that was chartered by Florida Gov. Ron DeSantis. The community sprang to action and cared for these families and individuals for two days until they were moved to temporary housing on Cape Cod.

Busloads of migrants have arrived unexpectedly in cities such as New York, Chicago, and Washington, DC.  In most cases passengers were misled about where they were going and what would happen next.  Legal challenges have begun against this tactic, but we are aware it could happen again, and communities within Southern New England UCC could suddenly find themselves welcoming strangers.

Our commitment: We want to prepare as much as we can, and we need your help. This is an opportunity for congregations, denominations, immigration agencies and other nonprofits to work together to manage the emergency of a sudden arrival of immigrants and support them until longer-term arrangements can be made.

If your congregation or a group you are part of is already working on this, we would love to know, and connect you to other congregations interested in doing the same.  And if you would like to help in ways small or large – including joining the team coordinating these efforts for the Conference -- we would like to know that too!

Please reach out to Karen Methot (methotk@sneucc.org) and let her know if this is work you are engaged in, or interested in. We’ll be back in touch with more details.

Photo by Barbara Zandoval on Unsplash