Two Massachusetts Conference churches are listed on the international peace light google map this year as designated places to receive the traveling light of Bethlehem.

Rev. Jennifer Valentine of First Congregational Church of Southampton, UCC, was a pastor in New Hampshire in 2011 when she read an article about the International Peace Light and called the listed contact to request to be one of the Peace Light Keepers.

According to peacelight.org, "Each year, a child from Upper Austria fetches the light from the grotto in Bethlehem where Jesus was born. The light is carried in two blast proof miners' lamps on an Austrian Airlines jet from Tel Aviv, Israel, to Vienna, Austria, from where it is distributed at a Service of Dedication to delegations from across Europe who take it back, with a message of Peace, to their own countries. Austrian Airlines then flies the miners' lamps containing the Peace Light from Bethlehem to New York City."  The official US Peace Light website is maintained by two Boy Scout volunteers in an effort to facilitate the distribution of the Peace Light from Bethlehem throughout the North American continent. Valentine met up with a scoutmaster from Pembroke who was traveling to Missouri and back, offering the light along the way.  After receiving the light, Valentine then began spreading the word and distributing the flame to others.  She keeps an oil lamp burning in her home so the flame would be available 24/7.

After being called to Southampton this year, Valentine brought the light to the church and suggested they not only use the flame to light the Advent wreath, but to also invite the community to receive the light at a distribution event. The church then hosted a peace light open house during Advent, inviting members of the community to bring their own candles and lanterns to receive the flame.  In addition to receiving the light, the attendees had the opportunity to visit different stations that were set up around the church where people could pray for themselves, the community, the nation, and the world.  The station tables were equipped with posters of prayer quotes and materials for some form of activity.  For example, one could place a sticker on a globe, marking a city or region that was the recipient of their prayers.  Others stuck bandaids on a map as a sign of being a healer.  At the community station, you could cut hand shapes out of paper and add them to a circle of love.  And if you were praying for yourself, you could write on a stone a word that would bring you peace, and then place the stone on a community cairn.  The pile of stones is an ancient symbol used by hikers today to signify one is on the right path. There were also coloring stations with pages of peace doves. The light was received by about a dozen families, and will spread from those to others.

"The hectic season can be anything but peaceful and the flame can center families.  Also, during this turbulent political time in our nation and globally, through sharing the peace light we offer a moment for the community to find encouragement to continue to hope and act for peace," said Rev. Valentine.

One member of the congregation posted a comment on the church's Facebook page: "We have received the peace light and it has created a flame of hope in our home."

Since the open house, Valentine delivered the light to variety of places including the United Church of Bernardston.  The pastor, David Neil, served with Valentine at the New Hampshire church so he was quite familiar with the flame.

"It's a wonderful symbol that this light that has been around for 1500 years, has been touched by so many sources around the world, and is still going," said Neil.  "When the light is passed to people, there is a general feeling that they are more connected to the world around them, which is especially important these days where news of non-peaceful events is often reported."

The flame has been used to light the church's advent wreaths, was the center point for their Blue Christmas service, and will be passed during the Christmas Eve candlelight service.  Neil commented that some people have already taken the flame home via a lantern, then have blown out the pilot light on their heater and replaced the original flame with the flame from the lantern. By doing so, they believed they feel the warmth and peace of Bethlehem all year long.

The Bernardston church has made the light available to anyone who wants to receive it and because they are noted on the official map of distribution, anyone wanting the flame can access it there anytime.  Individuals, as well as representatives from organizations and churches, are invited to stop by and receive the light. In fact, representatives from a Lutheran and a non-denominational church in the area have already obtained their lights.

"It's a mostly undiscovered treat for this time of year," said Neil.  "It is a wonderful symbol of uniting and a meaningful way to share the light of the season." 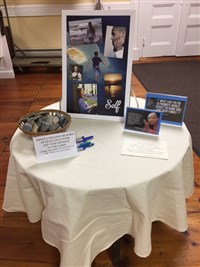 Valentine is not only sharing the light itself, but is also sharing the meaning with those who may not want to take the light home.  While meeting up at a coffee shop to pass the light to Liza Knapp, the Designated Term Minister at the Belchertown United Church of Christ, customers were so intrigued by their conversation and the light, they asked to know more about the meaning and the story behind it.

For those hesitant to take the light because they feel it is too big a responsibility -- or too dangerous -- to keep a flame burning, Valentine explains that once a flame has burned on a wick, that wick is infused with the energy of the light.  So when you rekindle the wick, you rekindle the flame and energy of peace.

It's just like our hearts, "she says, "Sometimes we need a rest but we can be rekindled and reinvigorated with our work during the Christmas season.

"Isaiah foretold of Jesus' birth, identifying him, among others things, as the Prince of Peace, and Paul wrote to Ephesus, 'For he is our peace; in his flesh he has made both groups into one and has broken down the dividing wall, that is, the hostility between us.' Passing this light offers us a chance to connect with others and share a visible reminder that God is with us, Emmanuel."

As Southampton church administrative assistant Patty Desroches commented, "Just by sharing this story through Spotlight, we are continuing to share the peace of the Bethlehem light."

Comment below and let us know if you have been a recipient and are burning the International Peace Light flame.

You can contact Rev. Jennie Valentine via the church office at (413) 527-1173 or email churchoffice@shcong.org.  You can see more photos of the Bethlehem Peace Light Open House on the Southampton facebook page.