Ludlow Plarning Platoon Makes Impact on the Environment and Homelessness

First Church in Ludlow is involved in a ministry that combines environment issues with the social justice issue of homelessness.  Dozens of folks there are collecting and cutting plastic bags and crocheting them into sleeping mats for the homeless; and in doing so are helping to reduce the amount of plastic ending up in landfills and oceans where it can do damage to the animals and the earth.

In order to transform the potential pollution-maker into a functional item for the homeless, the bags are cut into strips, looped, and then rolled into balls of "plarn," or plastic yarn that can then be crocheted.  It takes over 500 bags to make a 3.5x6 foot mat with a handle. First Church should always have a good supply, though, since, according to ecowatch, approximately 500 billion plastic bags are used annually worldwide.

The unique mats – which have comforting messages attached to them -- are blessed during worship, and have been given out with the assistance of a group providing healthcare for the homeless and at Lorraine’s Kitchen in Chicopee.   The plastic mats are a welcome relief to the homeless, who tend to sleep on the concrete, or cardboard which can shred and be destroyed if it gets wet.  Since the bags have been rolled and looped, the mats are softer than the cardboard, are water-resistant and durable, and are easily carried.

Volunteers of all ages, from 5 to 85 years old, have worked on this project. It takes around 70 hours to complete one mat.  Some folks crochet, while others collect or cut or roll the plarn, so there is no heavy burden on one person to complete a whole mat.

The Plarning Platoon, as they like to call themselves, has also brought this creative recycling idea to others outside their community.  In September, they brought their idea to the ‘Big E’ Eastern States Exposition – one of the largest agricultural fairs on the east coast. That event garnered interest from many attendees and the media which have helped the small church in Ludlow get their message out to the whole country.

“Part of the excitement of this ministry is that so many people have become involved,” said Robison, chairperson of Missions and Social Action at First Church. “It started as a First Church mission and has expanded so we have folks helping from communities all around us. Granby Public Library and Brimfield Senior Center have partnered with us to make mats and bags. We have spoken to a group of nursing students at UMASS Amherst and have plans to bring the plarning idea to other groups. Many people work at home making balls of plarn or crocheting. We meet twice a month to work together and always have people join us from Springfield, Chicopee, Ludlow, Wilbraham and other towns. It has truly become a community mission that honors Proverbs 14:31 which says ‘Those who oppress the poor insult their Maker, but those who are kind to the needy honor him.’”

Pastor Robyn Burns, quoting Genesis 1:31a, said: “When the earth and all that is in it was created, God saw everything that God had made, and indeed it was very good.”

“All people are entrusted with caring for God’s creation,” she said, adding that people as far away as Africa are creating items out of plastic bags. “We demonstrate our love of and unity with Christ by the way we care for our sisters and brothers who have nowhere to lay their heads just as Jesus did.” 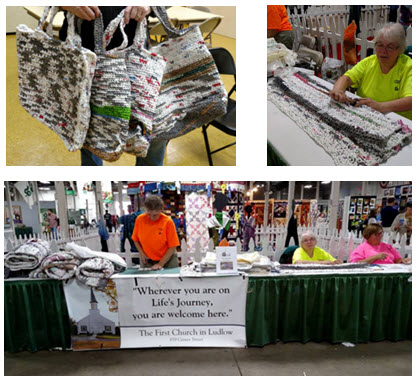 The group is finding additional ways to use these throwaway bags to help the community.  In April they are teaming up with a Health Care for the Homeless group and in addition to sleep mats will provide plarn tote bags that will be filled with peanut butter and crackers and personal care items, and can then be used by recipients to carry their personal items.

Psalm 24:1 is one of the psalms that inspired A New Awakening:  Season of Prophetic Climate Witness, a New England Regional Environmental Ministries (NEREM) campaign (founded by Minister & President Jim Antal) that encourages all to be witnesses on behalf of God in the context of climate crisis. NEREM believes that in order “To live rightly by all coming generations, we must allow care for ‘the earth and all that is in it’ to become more central to our moral and spiritual concern....The changes created by global warming might be environmental, but the human impacts of these changes render climate change the defining social justice issue of our century, one that supercharges other social justice issue.”

You can contact Karen at the church office at 413-583-3339, email office@ludlowfirst.com or at plarn1st@gmail.com.  Visit their Facebook page at https://www.facebook.com/firstchurchludlow/ to see photos of the plarning process and their BigE exhibit.

UPDATE:  Ginny from Mittineague Congregational Church, West Springfield reported that her church also makes the same homeless mats and that it is "Awesome Outreach"