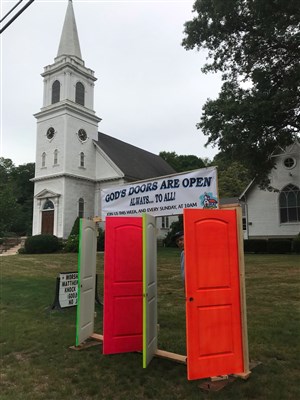 “So God’s doors are always open to you, which of course begs the question, are your doors open to God?”

The Open Doors were an effort by the North Branford worship team to change the way they brought God’s word to the community. What often is called Rally Day or Homecoming Day in churches throughout the state, North Branford called Open Doors Sunday.

“We wanted to encourage more families to come worship with us… to extend a welcome, not only to our current members but to any in the community,” said Taylor.

Taylor said he’s seen doors on church lawns before, but was always surprised to see them closed. The idea of open doors seems more inviting. And Taylor described the bright neon paint as “disruptive.”

“We need to be disruptive in this culture,” said Taylor, “to shake the norms and introduce something that captures the attention of the community.”

In his September 9th sermon, Taylor talks about knocking on doors, referring to Matthew 7. During his sermon, he refers to several contemporary musical pieces related to doors, and even  "knock knocking" on doors. He then moves into the idea of asking, searching, and knocking, saying these are the three actions Jesus suggests for getting closer to God. But Taylor says the Open Doors were another journey in knocking on doors as he searched for and asked different members of the congregation for someone to donate the two sets of doors, another to transport them from a warehouse in Winsted, and yet another to frame them, paint them, and set them on the lawn.

The effort of all those involved worked. On Sunday, Christine Sochocki and her family walked through the real entry doors of the Branford church. Sochocki said her family was looking for a new church to attend and she saw the doors on the lawn.

“I thought it indicated that all were welcome to come here,” she said. “Basically, that was the message we wanted to hear.”

Sochocki and family attended the worship service and said they found the North Branford congregation as welcome as the doors indicated. Her family enjoyed the contemporary music Taylor played during his sermon, and later spent time talking to him and other members of the community. She was even surprised to see one of her daughters choose to sit with new friends from the Sunday School program instead of with the family during an after-service brunch. To her family, the open doors and warm welcome of the people in North Branford were comforting.

“It shows that they really want people to come into their church,” said Sochocki.