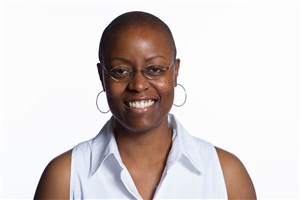 A minister and social justice educator who has trained church leaders around the country on doing social justice ministry has been chosen to serve as the new Racial Justice Team leader for the Southern New England conferences.

Dr. Donique McIntosh is a native of Cleveland, Ohio. She graduated from Fisk University and went on to earn a master’s degree from the University of Tennessee and Vanderbilt Divinity School, and a doctorate in social justice education at the University of Massachusetts Amherst.

McIntosh has served as an associate minister at several churches and is in discernment with the Chicago Association. She has consulted with the Connecticut Conference on developing welcoming and affirming ministries and the national setting on the development of social justice curricula, served on the Justice and Witness Ministry Team of the Chicago Association and on the planning committee of the African American Women in Ministry Conference. Her calling to advocate for social justice has led her to colleges, non-profits, national conferences, state legislative offices, and the White House. Dr. McIntosh’s writing has appeared in scholarly journals and the Huffington Post.

“What deeply impressed the search team was Dr. McIntosh’s capacity to ask questions which encouraged us to think beyond our limited frames,” said The Rev. Don Remick, Massachusetts Conference Interim Transitional Conference Minister. “She brings a strategic and experienced perspective to this crucial time in both the formation of our new conference and the changes facing our culture and country. “

McIntosh said that what drew her to the position was “having the opportunity to bring my training in curriculum development and workshop facilitation in social justice education to the Church full-time.”

“I believe that the Church is uniquely positioned to speak and do the work of love-centered justice particularly at this point in our nation's history and although I feel the burden of the moment, I'm also excited about the work that we'll do together to build a more just world,” she said.

McIntosh takes over for Toyan (TJ) Harper, who had served as Racial Justice Associate in Massachusetts since 2016, and in both Massachusetts and Connecticut since 2017.  She will begin her ministry on Aug. 5, and will be reachable at mcintoshd@ctucc.org.

“The position posting was sent out through a variety of networks and contacts to reach the broadest and most diverse audience possible,” Remick said. “We received interest from 12 people. We interviewed 4 candidates.  And with prayerful support the search team discerned an exceptional candidate from a field of gifted possibilities.”