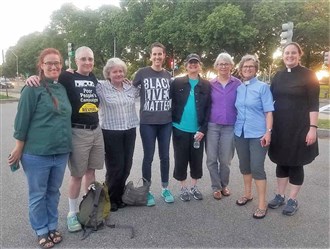 On Memorial Day, members of the Massachusetts Poor People’s Campaign, veterans, people experiencing homelessness, and clergy pitched tents on the Boston Common to draw attention to the intersections of a bloated war economy, the plight of our veterans, gun violence in a nation obsessed with militarism, and homelessness – especially within the veteran community. From noon on Monday until noon on Tuesday, people spoke, poems were read, and a flag was signed with names of the fallen: fallen in war in other countries, veterans fallen to the trauma of war after returning home, and those fallen to the war of gun violence on the streets of the United States. 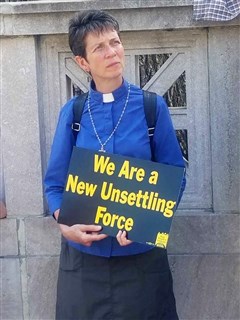 At 2 PM on Tuesday, people gathered for the third rally in three weeks of the Poor People’s Campaign, uniting with 32 other states across the country to call for an end to this war economy and call for a more just and peaceful world. Rev. Wendy Vander Hart, Associate Conference Minister, (left), began the rally with an invocation, “God you alone are our refuge and strength…we gather on these steps of power, in these times of struggle, to help bring about the realm and reign you have imagined for all your people…”

Prayers were shared from the Muslim and Jewish communities, and many speeches were offered sharing statistics and stories of impact, words of hope and words of challenge. 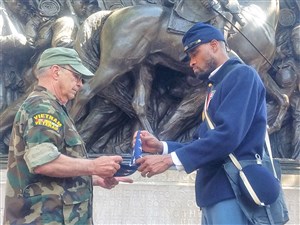 At 3 PM, Khalil Saddiq, a Marine veteran and organizer, and a Massachusetts 54th Regiment Civil War re-enactor; and Dan Luker, a Vietnam War veteran, folded the signed flag in front of the memorial to the Massachusetts 54th Regiment and Robert Gould Shaw, their commander. It was carried into the State House to present to the Governor by Mr. Saddiq and Savina Martin, also a veteran and organizer for the Poor People’s Campaign. When the Governor did not come out to receive the flag, 16 members of the crowd stepped forward to hold the space until the flag could be given and the demands could be heard. When the State House closed, the 16 were arrested on trespassing charges. Two members of the group were UCC clergy – the Rev. Liza Neal and the Rev. Michael Clark. In court on Wednesday, the group acknowledged responsibility and accepted a civil infraction. There will be no fine unless re-arrested within 6 months.

On June 4th the Massachusetts Poor People’s Campaign will address ecological devastation and health in Springfield.

Get more information at: www.macucc.org/poorpeoplescampaign