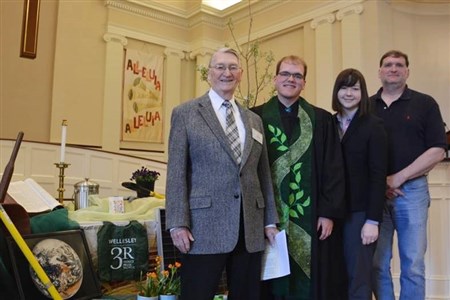 The artful display in the sanctuary of Wellesley Congregational (Village) Church told the story in a worshipful way: the wheelbarrow and rake, the well-known photo of Earth taken from the Moon, flowers and greens and recycling bags…and a young tree, awaiting its permanent home.
Such was the setting last spring when the Mass ReLeaf ministry of the Massachusetts Conference, and Director Neal Seaborn, received the church's Abernethy Award, honoring exemplary spirit and practice of service to others.

Over the past several years, the involvement of the UCC and other religious organizations in the earth’s environmental stewardship movement has gathered momentum. In towns and cities across America, people of many faiths are rolling up their sleeves in practical and far-reaching ways in response to a faith-filled call to re-examine what it means to be human and how we must live on this planet for survival.

The MassReLeaf Ministry recently completed 11 years - facilitating 42 tree-care projects led by 45 local religious organizations of multiple faiths and other local organizations - on public and access qualified lands across Massachusetts. Together, they have planted 744 mature trees. In addition, Mass ReLeaf has provided 290 seedling trees to Conference churches to emphasize the importance of planting trees in municipalities and offered planting help as well.  Their ministry has benefited dozens of communities and hundreds of people living in urban areas.

Why plant trees?  First the benefits provided by urban and community forests to municipalities must be understood, not to mention the impact of planning and executing tree care projects on the people taking part in these projects.

Our urban and community forests provide: 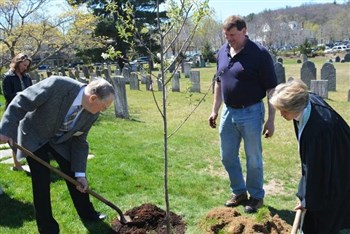 Urban and community forests reduce levels of pollutants that seriously impact human physical, mental and emotional health. An average urban tree absorbs about 15 times the pollution absorbed by a tree located in a pristine forest, an average of about .46 tons (900 pounds) of toxic gases per year. And at the same time, each tree absorbs an average of about five pounds of minute solid particles that cause severe asthma, emphysema and lung cancer in humans.

And finally, urban and community forests: To learn more about this exciting ministry, visit macucc.org/massreleafministry or contact Neal Seaborn at eseaborn@comcast.net or 781-237-2152.