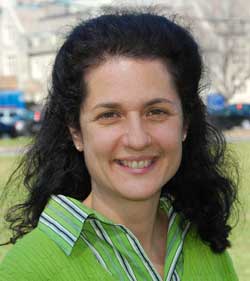 As the Southern New England Conference continues to develop news ways to live out its vision, and in response to budget constraints, the position of Legislative Advocate is being sunsetted.

Michele Mudrick’s last day on staff will be February 15, 2022.  Mudrick served on the staff of the historic Connecticut Conference beginning in 2014, and then transitioned to the new Conference when it was formed Jan. 1, 2020.

In this part-time role, Mudrick's primary focus has been on speaking out – and encouraging others to speak out – on pending legislation related to justice issues in Connecticut. She organized meetings with legislators as well as rallies and vigils, and frequently submitted testimony. Some of the bills she lobbied for included increasing the minimum wage, paid family and medical leave, gun safety measures, sustainable energy procurement, and access to original birth records for adult adoptees.  As part of that work, she also served as the founder and director of the Coalition Against Casino Expansion in Connecticut. As the new Conference formed, she presented workshops and met with church leaders throughout the SNEUCC.

“It has been my honor representing you as the Legislative Advocate for the past eight years. I deeply appreciated this opportunity, and it has been a joy to work and advocate with you,” she said.

"Because of COVID realities, I first met Michele in person during an action at the Connecticut State Capitol Building after she convinced me it was important for me to be there,” he said. “This perhaps perfectly signifies the impact of Michele's work within our Conference and as part of our Diversity, Equity and Inclusion team. She will leave a legacy of powerful engagement with churches, non-profit organizations, elected officials and others in Connecticut and beyond."

“Michele has begun a good work in legislative advocacy and for that we are deeply grateful,” Rev. Dr. Price said.

She added that, despite the elimination of this role, working to make God’s love and justice real in Southern New England and beyond is a core part of the Conference’s mission.

“While confronted with budgetary constraints, I want to give a fervent assurance that our commitment to justice programs is strong,” she said. “To that end, we are prayerfully seeking commissioned ministers for specific and transformative justice initiatives. More details to come!”