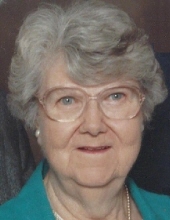 Ruth Ann Dudley, who nurtured a generation of faith formation leaders while serving on the Connecticut Conference staff, died peacefully on Oct. 4 at the Masonicare Health Center in Wallingford. She was 99 years old.

Ruth joined the Conference staff in 1971, and became Executive Director of the Christian Education Department.in 1974 - the first woman executive in the 200-year history of the Conference. While on staff, she created an extensive library and media resource center, which was later dubbed the Ruth Dudley Resource Center in her honor. In 2017, those resources were moved to the J.P. Webster Library in West Hartford, where it became the Ruth Dudley Collection.

"Ruth Dudley was an important leader on the CTUCC staff for many years," Conference Minister The Rev. Kent Siladi said. "Her commitment to faith formation and the importance of growing in the faith as disciples of Jesus ran deep and wide among our congregations. Her impact was significant.  She was a generous and gracious leader who listened deeply and responded to needs with grace.  She will be missed."

Karen Ziel, the current Minister of Faith Formation and Leadership for the Conference, was herself nurtured by Ruth.

"Ruth was a mentor and guide to anyone with a role in Christian education. In her time as Executive Director of Christian Education for the Conference, she offered support, affirmation, encouragement, and a generosity of spirit to all," Ziel said. "She stewarded the Associate in Christian Education (ACE) course for many years and nurtured leaders with valuable resources."

"I was grateful for Ruth’s encouragement and support as I began my role in the Connecticut Conference managing the collection of resources she helped to develop and gather.  This exceptionally well curated collection was her vision. She was a true servant leader," she said.

Ruth's husband, Edwin, had lived with her at the Wallingford facility prior to his death in early September. The couple had recently celebrated their 70th wedding anniversary and Ruth her 99th birthday.

Ruth spent her life in service through the church. The following is from her obituary:

Ruth was the third of nine children – Gladys, Bill, Tom, Charles, Jack, Russ, Infant Bobbie, and Jean - all now deceased – born to the late John and Susie (Leach) Milliken of Coalton, Ohio. She is survived by many nephews and nieces, whose affection she valued especially after the death of her siblings. Widowed unexpectedly in 1929, Ruth’s mother Susie Milliken took her family through the depression decade ahead with a firm hand and a loving disposition.

Ruth attended elementary school in Coalton and high school in Chillicothe. With scholarship support she enrolled in Baptist Missionary Training School in Chicago, graduating in 1945. After spending a year at Linfield College in Oregon, she came east to study at the Hartford Seminary. While there she worked part-time at the Christian Activities Council, an organization providing services to Hartford area churches. It was there in 1948 that she met Ed, who was a waterfront counselor for a CAC summer camp. During the next year both Ruth Ann and Ed stayed on at CAC working full-time, and they married in Hartford in 1949. For the next twelve years Ruth was busy as a homemaker with their family of y three children: Paul (1951), Anne (1954) and Tom (1958). Also during this time, the couple spent the year 1953-54 in Denmark as students in a folk high school. Annie was born there early Easter morning.

On retirement in 1985, Ruth Ann and Ed went to Turkey for two years to work at a UCC-related girls' preparatory school in Izmir. Ed taught mathematics, while Ruth volunteered with the school library, tutoring, and community services such as the orphanage and bookmobile. In 1987 Ruth Ann and Ed returned to their North Haven home. The couple picked up again with church and community activities while embracing a new identity as active grandparents. Living into their 80's with increasing infirmity, Ruth Ann and Ed sold their 150-year old house in 2010 and moved to assisted living at Ashlar Village in Wallingford, and subsequently to the nearby Masonicare Health Center.

Ruth is survived by her children Paul (Carol) of Glastonbury, CT, Anne (Alan Taft), of Portland, OR and Tom (Fiona) of Weaverville, NC, her grandson Owen of Brooklyn, NY, as well as numerous nephews, nieces and grand-nephews and nieces in Ohio and the Midwest. She was predeceased by her husband Edwin, who died September 6, 2019.

Service plans will be announced at a later date. In place of floral offerings, memorial gifts may be made to the North Haven Congregational Church, 28 Church Street, North Haven, CT 06473 or to the Masonic Charity Foundation of CT, P.O. Box 70, Wallingford, CT 06492.