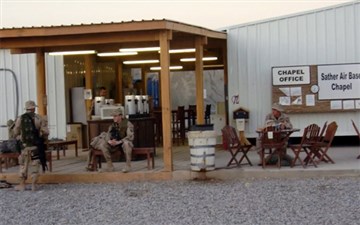 WALLINGFORD (07-13-2016) – Holy Joe's Café celebrated it's 10th anniversary this May. The world-wide coffee service to US Military personnel has expanded its reach while continuing to create a "taste of home" and a moral booster for soldiers deployed throughout the world.

Holy Joe's began in 2006 when the First Congregational Church of Wallingford learned that a chaplain at a Baghdad airbase was trying to create a café for the soldiers. Under the inspired direction of Tom Jastermsky, a deacon at the church, several coffee providers were contacted for donations, crates of coffee were sent overseas, and a new ministry was born.

Today, Holy Joe's, named from a Civil War nickname for chaplains, distributes coffee for chaplains in 47 countries around the world. In recent years, the ministry has expanded to European bases and troops in Africa. Holy Joe's also sends coffee to chaplains at 63 US bases where soldiers returning state-side can continue to find a bit of home and relax with a cup of coffee.

"A cup of coffee is the conduit," says Jastermsky, referring to the way coffee brings service men and women in contact with a chaplain.

This contact is the true ministry of the Holy Joe's program. Chaplains receive the coffee and setup places where soldiers can get a cup and possibly chat while they drink. In places where operations run 24 hours a day, coffee can be very important.

Major Charlene Johnson-Sabedra is a UCC Chaplain serving in Afghanistan. She says soldiers can't get regular access to their dining halls outside of meal times, so the "cafés" become important gathering places. Since those cafés are located near the chaplain's office, soldiers find it easier to stop and talk with these men and women dedicated to supporting the mental and spiritual health of soldiers.

"We have a greater opportunity to build positive relationships with soldiers," says Johnson-Sabedra. "Coffee creates an inviting space for soldiers to come and seek help when they need it."

Soldier come to talk about all kinds of issues, according to Johnson-Sabedra. Many are young soldiers who have not had much time to prepare for deployment. Johnson-Sabedra says these soldier often express separation anxieties. Soldier tend to talk about relationship concerns as they leave family and loved ones for months at a time. The chaplain has even had to advocate for soldiers whose problems are severe enough to require intervention. Johnson-Sabedra shared one story about a young man whose children require special care and whose wife needed a surgery. The chaplain was able to held get the soldier a "compassionate reassignment" so he could get back to his family where he was needed.

Even at a distance, the chaplain, with help from Holy Joe's, can help soldiers. Johnson-Sabedra works with a Communications Unit where many of the soldiers she serves are deployed away from the base. She has arranged for coffee and coffee makers to be delivered to their locations, proving to these soldiers that she was there for them, even if she could not be physically present.

The relationships, the moral boost, and even the simply moment of enjoying a cup of coffee during a long shift, are possible through the donations of coffee and coffee makers from Holy Joe's Café. To help with this ministry, visit the UCC Holy Joe's website or simply mail donations to Holy Joe's Café c/o First Congregational Church, 23 South Main St, Wallingford, CT 06492.

Drew Page is the News & Media Editor for the Connecticut Conference, UCC.