A Bucket of Sidewalk Chalk Becomes an Invitation to the Community

China has its Great Wall which was meant to prevent invaders from entering, but today some consider it a symbol of the country's enduring strength. Germany has the Berlin Wall, which was both a symbol of the Cold War when it was built and an illustration of re-unification when it came down. Jerusalem has its Western Wall where people believe there is the presence of God in the rocks so they place slips of paper containing written prayers into its cracks.

And now Haverhill has its own symbolic wall. 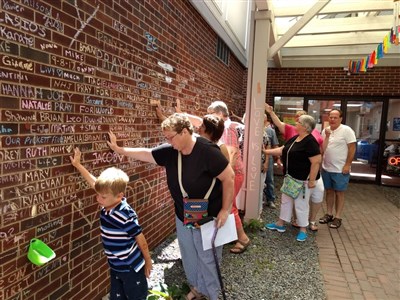 Phoenix Rising United Church of Christ is an open and affirming church start in Haverhill, with a mission of being an alternative spiritual center where people can explore, connect, and transform. Their storefront space in downtown Haverhill offers disillusioned and spiritually homeless Christians and others a sense of hope and a tolerant, joyful, and compassionate message -- with a big focus on the power of prayer.

"Prayer seems to be universal whether religious or not, and many believe in prayer or at least sending out positive thoughts on behalf of themselves or others," explains founding Pastor The Rev. Donna Spencer Collins.  "Friends of Phoenix Rising UCC have been exploring ways we can inspire prayer together and with those outside our gathering space."

Inside the sanctuary, there is a prayer wall where people post prayers on post-it notes. Outside in the front entry-way multicolored prayer flags and wind chimes hang overhead, moved by gentle winds, making a subtle call to those in the area.

One  day,  when she was outside cleaning the breezeway, the church administrator Shawna had an inspiring moment. She wrote in chalk on one of the pillars the adopted chorus of the Church's anthem:  "And all the people said Amen!"  And then she thought, "let's have an outdoor prayer wall." Shawna went inside, grabbed some more sidewalk chalk and a bucket, went back outside to the brick wall of the building and wrote an invitation to prayer, added a few names to the wall and prayed for them. 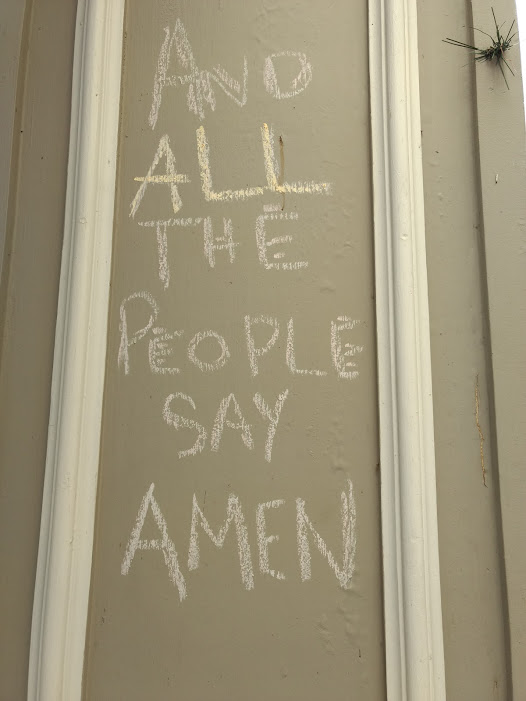 The following Sunday members added names, and later more names appeared on the wall.  As the number of names on the wall increased, it became quickly obvious that passersby willingly accepted the invitation to connect to God.

"One day I watched from inside as two young people stopped by and read the words and names, then before they left each of them wrote several names on the wall," said Spencer Collins.

Recently, Alison Colby-Campbell, a local blogger, wrote:  "THOH [The Heartbeat of Haverhill] finally made it to that wonderful idea brought to the city by Pastor Donna Spencer Collins and her congregation -- the prayer wall at Phoenix Rising United Church of Christ. Met a man walking by who asked what it was all about. I said add your name or a specific cause if you would like to be remembered in prayer by the folks at Phoenix Rising Church right here, and he said 'everyone needs that' and we signed our names together."

At the time this article was written, over 200 names, plus requests and some heartfelt graffiti have been chalked on that wall. 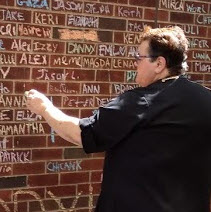 "If prayer is the world's greatest wireless connection, then the many prayer opportunities we offer at Phoenix Rising UCC have become conduits of hope and inspire faith," said Spencer Collins.  "We must never underestimate the power of prayer. More importantly we must never underestimate what can happen when space is made for people to become awake and aware of the universal presence of God."

You can see the wall for yourself, and chalk in your own names, at Phoenix Rising United Church of Christ, 192 Merrimack Street, Haverhill, MA 01830.  You can reach Rev. Donna Spencer Collins at 978-891-5799 or pastordonnaprucc@gmail.com. Follow them on Facebook at  https://www.facebook.com/phoenixrisingucc/.