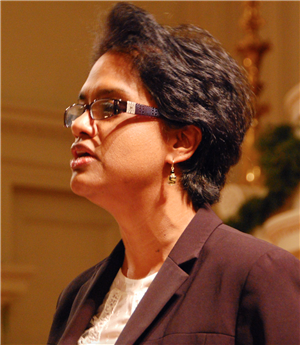 BALTIMORE– The Rev. Dr. Damaris Whittaker, pastor of First Church of Christ, Hartford, will be one of the Theological Reflectors for General Synod 2017 in Baltimore on Sunday. Her reflection will focus at least in part on what she sees as a dichotomy present in the denomination's bi-annual national gathering.

The theme for Synod 2017 is "Make Glad," a reference from Psalm 46:4 and an invitation for the denomination to re-energize and rejoice in the service of God's work. Whittaker thinks the timing is appropriate for this focus on joy and rejoicing because congregations are generally stressed about declining numbers and dollars in the local church. She also recognized the importance of the resolutions that will be debated at Synod, remarking that these specific resolutions are relevant to issues in the world today.

"That alone is an element that should make us glad in terms of the movement of the Spirit still within us in this world, regardless of the statistics of decline," said Whittaker.

Whittaker also sees Synod as a positive demonstration of what the church might be.

"We come to Synod and the national church demonstrates to us how exciting it would be if we got out of our regular stuff," she said.

But attending Synod also illustrates how different the vitality and reality of the local church can be from the that of the national church gathering.

"Synod is a place of rejoicing, reuniting, recharging, and refocusing on who we are in the world," she explains, "but when we go back to our church, it's like being on the moon and then returning to earth."

One of the main differences, she says, is in the way our local churches adhere to old, outdated ways of doing church. As an example, Whittaker turns to the diversity of our churches.

"The diversity at Synod is absolutely beautiful," she says. But this diversity has not translated into changes in the local churches of Connecticut. Whittaker points out that churches have good intentions; congregations in general want to see people of differing identity in their pews, but even when a diverse group comes to our churches, this does not necessarily lead to changes in governance.

"We like to know people are there, people from certain backgrounds, but we do not change because they are there. We don’t bring them to the table and say, ‘what is your experience and how can we adapt what we are doing because you are here.'”

Whittaker says she plans to speak to this reluctance to change in her reflection on Sunday, but also plans to listen carefully to the conversations in committees and plenaries to hear what is on the mind of the people at Synod. As a theological reflector, she understands that her reflection may… change.

Rev. Whittaker is transitioning from Pastor of First Church of Christ in Hartford to pastor of Fort Washington Collegiate Church in New York City this summer.