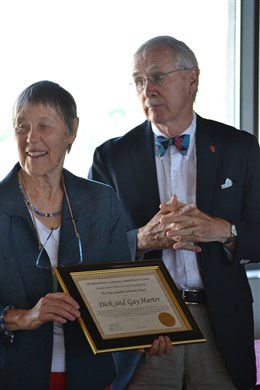 Richard M. (Dick) Harter and Angelica (Gay) Harter were named co-recipients of the Andy Gustafson Award at the 217th Annual Meeting of the Massachusetts Conference on June 18.

This is the second year the award has been presented. It was named for the Associate Conference Minister for Stewardship & Financial Development who died in 2014,and who inspired countless UCC members, pastors and congregations to live more abundantly, to hope without constraint, to share with joy and enthusiasm the gifts God has given them, and to wake up each morning with gratitude and generosity in their hearts.The award is given to a member of the Massachusetts Conference who embodies these characteristics.

Gay and Dick Harter have a long history of leadership in their local church, the Massachusetts Conference, and beyond.  For over fifty years, they’ve been members of First Church in Cambridge where, most recently, Gay has continued her work as a leader of the First Church Palestine Israel Task Team while Dick headed the church’s “For Such a Time as This” capital campaign.  While Dick had stints as treasurer and moderator of the church, Gay served as a deacon, as well as on the Education, Social Action, Missions, and Social Justice Committees.

In addition to their leadership with First Church, Dick and Gay have also expressed their faith through the wider church.  Gay is currently a member of the Conference’s Israel and Palestine Task Team, as well as the UCC Palestine/Israel Network.  She has worked for the Massachusetts Society for the Prevention of Cruelty to Children, served on the Harvard/MIT/BU/UMass Board of Campus Ministry, and been involved with the Women’s Theological Seminary at Emmanuel College.  As part of the Pledge of Resistance, Gay was arrested in Boston and Washington in an effort to help Central American refugees find sanctuary.  While director of the Refugee Immigration Ministry, she and Dick hosted up to four asylum seekers at a time in their home.

Dick serves on the UCC Board, and the Boards of the Congregational Library and Massachusetts Congregational Charitable Society.  He was a trustee of Chicago Theological Seminary and its interim president in 2002.  Dick also served on the Conference Board and as its chair, been Conference Moderator, co-chaired the Conference’s Gift and Promise Capital Campaign, and been a trusted advisor to many churches making decisions about merger, closure, and legacy.  In addition, he is past president of the United Church Board for Homeland Ministries and the Massachusetts Council of Churches, and has served on the Board of City Mission.

Asked what has motivated them to do so much through their local church, the wider church, and social service agencies, the Harters replied that they do what they do because, “we know ourselves to be called by God to commit our energy, our trained and credentialed talent, and our available resources for steps toward greater justice, mercy, and peace.”