3/14/2018 - by: Drew Page - Justice and Witness
Share
All across the nation, students and adults participated in “walkouts” today to protest gun violence. In Connecticut, several churches joined these walkouts to show solidarity with the students from Parkland, Florida where this particular movement began.

Youth from First Congregational Church of Greenwich have taken another approach to ending gun violence. They created a banner in order to send a message to church members and the larger community that they feel change is necessary to keep youth safe from gun violence.

The banner depicts the silhouettes of five teens on a black background. The images of the teens are formed with 215 names of lives lost due to gun violence, and the places where mass shootings have occurred. At the top are the words “Be The Change”. Below the five silhouettes are the words “Never Again”.
The images does not use the word gun or show any image of a firearm. But the message is clear.

“We settled on an image that we felt honored the human side of the tragedy and called out for action,” said Rev. Patrick Collins, Associate Pastor at First Greenwich.

“It shows that the youth of our church are taking a stand, rising to the occasion like the youth from Parkland, and trying to make sure their voices are heard.”

Working together to create the banner inspired some deep conversations about honoring victims and calling for change. Collins said the image’s focus on the names, rather than guns, helped keep these conversations from getting political and partisan. Instead, the teens talked about what they can do to impact society now.

“There has been, and kind of still is, this mentality that, we’re still young and we have time to make an impact on the world, so we don’t have to take action yet or that our voice doesn’t matter as much right now,” said Lauren Michley, one of the youth who helped create the banner. “This banner proves that it’s not too soon, the time to take action is now, not later.” 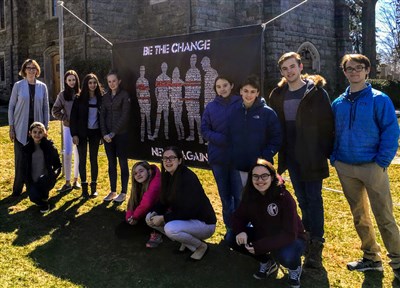 Of course any conversation about gun violence would include a conversation about owning guns. Marial Laffan said they did talk about the role weapons have in society and “whether or not they are necessary in order to have safety.” But she said the banner “accurately depicts the negative and more pressing side of the argument.”

Catherine Ziac liked that the work she and the others did on the banner furthered the conversations about gun violence. “[The church’s] work to further spread awareness of these issues makes me extremely proud to be part of this church,” Ziac said.

The youth have displayed the banner in front of the church and will be taking it to New York City on March 24 to join in the March for Our Lives NYC event.  Collins and the banner’s youth designers would like to make the image available to other churches and groups to use as flags, t-shirts or other items. To get more information about using the image, please contact the church at 203.637.1791.