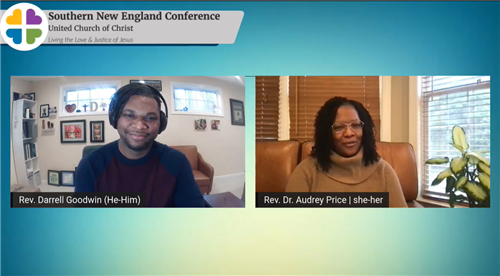 In a recent God Talks video conversation, Executive Conference Minister the Rev. Darrell Goodwin interviewed Reverend Doctor Audrey Price, who serves as the Executive Minister for Strategic Operations. During this interview, they discussed her call to ministry, her early career in technology, and working to realize the Love and Justice of Jesus.

Rev. Goodwin begins all his God Talks interviews by asking his guest how a loved one would describe them. Rev. Dr. Price responded by saying that her husband, Augustine, would say she is "serious minded and goal oriented," but that she also knows how to have fun. She and her husband share a love for travel as well.

When Rev. Dr. Price was asked about her call to ministry, she described it as a "progressive discernment and a progressive yes". At first, she says she thought perhaps saying "yes" to ministry was a "mistake". But during seminary she began to understand what she was saying "yes" to. Looking back on the 20 years of ministry, Rev. Dr. Price has learned that she understood very little of what she was called to do in those early years.

Rev. Dr. Price's call to ministry becomes more unique when she describes the work she did before ministry. With an undergraduate degree in computer science, she worked as a program manager, leading a team of engineers in software development for the federal government.

She explains later that she entered the field of computers because she loved math and its concrete nature.

"Two plus two will always be four. I don't care what context you put that in," she said.

Juxtaposing a career in ministry, Rev. Dr. Price shares how the two careers are more similar than expected.

"There are actually great parallels because there are some things that are absolute for me in my industry in that God loves all of God's creation and God respects and wants us to affirm the human dignity of all people. And so in that way, that is the two plus two equals four part of ministry for me."

The conversation turned to working with marginalized communities and Rev. Dr. Price's clear calling to minister in a denomination that works toward justice for all peoples. While discussing her background and its influence on her ministry, she shared a painful story in which she demonstrated her own bias to a friend who called her out, causing her to examine her own beliefs and how we look at all God's people. It helped her understand that she has a role, through both her background as a Black woman and a person of privilege, to "to give space and make space for voices that people were choosing to push on the margins."

Finally, the conversation centered on the role of the Executive Minister for Strategic Operation. Rev. Goodwin asked, "what is Reverend Dr. Price's daily life like?"

Rev. Dr. Price supervises the team leaders of several areas of the Conference: faith formation, the Center for Transformational Leadership, the area conference ministers, the justice and witness team, and the camps and retreats of the Conference. She describes herself as a "coach", a "guide" and an "advisor" to these areas.