Go Tell it On The Mountain: Small But Mighty Church Celebrates Anniversary

Go Tell it On The Mountain: Small But Mighty Church Celebrates Anniversary 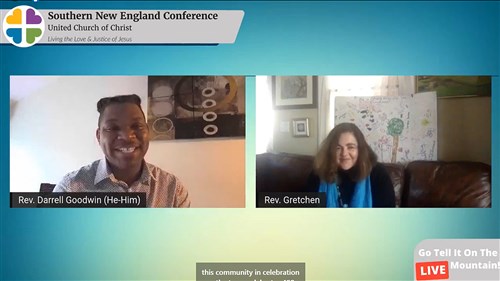 In the latest Go Tell it On The Mountain video, Executive Conference Minister The Rev. Darrell Goodwin spoke with the Rev. Gretchen Elmendorf as her church, the East Weymouth Congregational Church in Massachusetts, was preparing to celebrate it's 200th anniversary.

Rev. Elmendorf talked about how she initially imagined pursuing a call at a large church, but that she was exposed to smaller churches through seminary friends. When she came to East Weymouth eight years ago, she said, "there was a deacon who told me, well, you know, we're a church that's dying. The numbers are dwindling. And when I went into that sanctuary, I did not feel what he was saying. I felt vibrancy and love and fullness in that sanctuary of God's comfort and call. It was really exciting."

"One of the things that's just so true is that the majority of United Churches of Christ are under 50 (in membership)," Rev. Goodwin responded. "So I think we kind of make the nuance of the small church. Like it's this niche market, when the truth is it's actually the predominant church of the domination. So I think the voice of the small church pastors and our small churches really add to the tapestry of who we even say we are as denomination."

"Please come and lift up our little churches. And you know, there was man who had a habit of doing this - Jesus - you know, lifting up the little guy," she said.

Rev. Elmendorf went on to talk about the congregation's 200th anniversary, which coincides with the Town of Weymouth's 400th anniversary. As part of the service this past Sunday, in which Rev. Goodwin preached, the church gave out certificates of appreciation to town leaders in social justice and in the arts.

As an example of how people are recognizing the church's role in town, Rev. Elmendorf said, someone recently asked her to write a letter to the school superintended asking him to fly the pride flags at the schools.

"I was so touched and moved that she recognized that I, as a pastor, could play a role, could be a voice for that superintendent. To ask for him to do what he must do to keep people safe, to keep students safe, and to continue to enrich the diversity of the schools in our town," she said.

Rev. Goodwin said when he pastored a small church, he used the phrase #SmallButMighty.

"It doesn't actually take a thousand people to do transformative change in your community. It takes one. And then if that one talks to another one, then together, people start to kind of get this synergistic energy of transformation," he said.

Rev. Elmendorf also talked about the church's work to fight against the development of a natural gas compressor in town through the Fore River Residents Against the Compressor Station organization.

Photos and video from the anniversary celebration can be seen on the church's Facebook page.