Go Tell It On the Mountain: First Church of Christ in Simsbury

Go Tell It On the Mountain: First Church of Christ in Simsbury 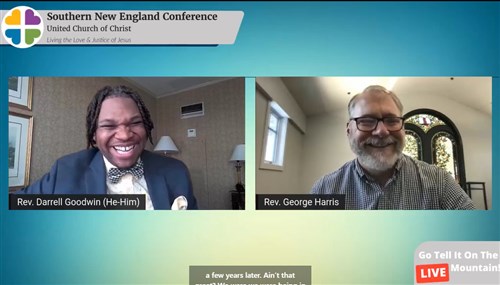 In another episode of Go Tell it On The Mountain, Executive Conference Minister the Rev. Darrell Goodwin interviewed Rev. George Harris, pastor of First Church of Christ in Simsbury, CT. Rev. Goodwin will be preaching in Simsbury on Sunday, March 20.

Rev. Harris talked about being called to Simsbury after having initially served in more urban settings - a call that he did not think, at first, would work for him. But the church was looking for someone with his background, he said, and it ended up being "a really perfect fit."

"I'm grateful that you said that. I think sometimes we can put our own call in a box. We can sort of say 'these are the only places that will work for me,'" Rev. Goodwin responded. "What are some things that have happened in the life of the church that really have confirmed - 'okay, God, this is where I know I'm supposed to be'?"

One thing Rev. Harris said has been life-changing for the church has been their active participation with the Greater Hartford Interfaith Action Alliance, or GHIAA.

"That began with several years of just relationship-building among clergy, and has since grown and become invested with lots of participation from our membership, a significant commitment on behalf of our church," he said. "And I think it has maybe not yet transformed the nature and the vision of the church here, but it's getting there."

For example, Rev. Harris said, anti-racism has been a core part of the vision of GHIAA. The Simsbury church recently trained a racial justice activation team, a group of eight members working to make anti-racism with the congregation a reality, he said.

"That in particular has been very, very exciting for us, and I do believe is going to result in some lasting transformation in the culture and the vision of our church here," he said.

Rev. Harris also talked about the significant renovations the church has been doing to the building and grounds following a successful $3.7 million capital campaign.

"We hadn't had a capital campaign or a building project in maybe 20 years or more, and so things were just showing their age. So we didn't build an addition or anything like that, but almost every single room and every single part of the church got touched in some way," he said.

Rev. Goodwin said that was good to hear.

"I think people have wondered: have our churches really been able to move forward in any way in the middle of this pandemic?" Rev. Goodwin said. "A number of our churches in all three states had started a process pre-pandemic, and just to see a lot of those projects now coming into fruition, it's just a really good sign of the healthiness of church. That even in the midst of struggle, there has been these ways in which the church has been stretching itself."

Rev. Harris responded by talking about the church taking in 13 new members two weeks ago - most of whom came to the church either via virtual worship or outdoor worship.

"They found the church in the midst of the pandemic and were able to build and grow their relationship during the pandemic to the point where they felt inspired to commit themselves to membership. So it's great. I know we're not alone in that. I know other churches have had that experience as well. So it's very exciting," Rev. Harris said. "It's affirming of the mission and the vision of the church, because it's people saying 'we see something here that we want to commit ourselves to.' So it's good all the way around."

Rev. Goodwin will be preaching at First Church of Christ in Simsbury at 10 AM on Sunday in person. The service can also be found online at: https://fccsimsbury.org/.

Watch the full interview below: