Go Tell It On The Mountain: Drinking Joy by Way of Firehose

Go Tell It On The Mountain: Drinking Joy by Way of Firehose 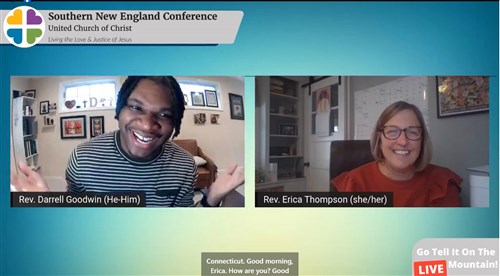 Rev. Thompson said when she started in the acting senior position, her intention was to work with the church to get them through a difficult time, and to then move on. But for the second half of that 18 months, she began to feel what she called a "softening of the spirit."

"I spent the better half of about six months in discernment, and I started talking to some beloved colleagues and, it just felt right," she said. " By the end of that kind of real season of discernment in my own life, that sort of softening had gone from a, 'no, this is where you're going to go, this is what you're going to do,' to a 'I think this is really where you're being called and, and what you're being called into, next.'"

Rev. Goodwin lifted up her use of the word discernment in describing her journey.

"I think sometimes in the search and call process, particularly for the underrepresented groups in the United Church of Christ - women, folks of color, LGBT people - it can sometimes feel like, 'oh God, this church is deciding all about me' and you can forget that, wait, I also should be praying. I also should be discerning. I also should be, you know, prayerfully considering and discerning the right fit for my ministry in my call," he said.

Rev. Thompson said that in a culture that is "so obsessed with production," discernment - like Sabbath - can feel unproductive. But, she added, it's so important.

Rev. Goodwin then asked Rev. Thompson what she is exctied about at Asylum Hill right now.

"We are sort of drinking joy by way of fire hose right now," she said with a laugh. "We have so much going on."

Rev. Thompson said early in the pandemic, she felt angry at the state of things. But she then saw the need to move past the anger and vision what was next.

"With my clergy colleagues and with lay leadership, we started to dream and vision, and we came up with what we call our roadmap. Our AHCC Roadmap 2024, and I'm going to say beyond," she said.

Rev. Thompon said they deliberately refer to it as a road map, rather than a strategic plan, out of recognition that the traditional ways of measuring success are now archaic. The plan, she said, has three "destinations":  nurture and engagement of those who are part of the congregation, working for justice in the neighborhood and beyond, and having impact on how Christianity is viewed in the world.

"So often, when Christianity or Christians are portrayed in the public sphere - whether that's in media or in print or social media - I just shake my head and I say, 'I do not know this Christianity of whom people are speaking.' It's not who I claim to be. It's not what my congregation looks like and is doing. It is not who I know clergy colleagues to be," she said. " These are the kinds of things that we need to be getting out into the world. To say Christian community can look very different than what's being portrayed by others."

Rev. Goodwin will be preaching at Asylum Hill this Sunday, and the service will be held in person and streamed online. More information is on the church website.