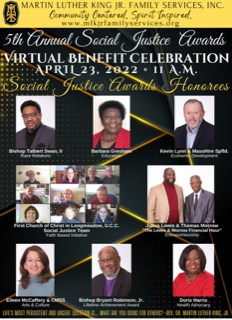 Those were the last words Ronn Johnson, Executive Director of the MLK, Jr. Family Services of Springfield, MA said when he and other Black leaders of the organization paid a surprise virtual visit to the Social Justice Team of the First Church of Christ in Longmeadow (MA) earlier this year. The team was chosen to receive a Social Justice Award during a virtual benefit celebration on April 23.

Mr. Johnson died just a few days after announcing the award, the first such honor given to a faith-based organization.

“We are so deeply moved to be chosen for this award,” said Mary Friedman, chair of the Social Justice Team at First Church. “For a predominantly white church in the town of Longmeadow to be honored like this  -  it just means so much to us.”

The group has engaged in a number of activities to increase their own awareness of white privilege and the history of racism as well as to participate in actions locally to combat intolerance and further the realm of justice. These actions include vigils and marches against gun violence, stand-outs and marches protesting racism and anti-asian hate, sponsoring book and film studies, partnering with the Pioneer Valley Project of Greater Springfield and the Longmeadow Anti-Racist Coalition to study police reform and other issues including the Department of Justice report on the Springfield Police Department, and helping to plan “From Ally to Accomplice” - a Dialogue with Black Leaders in Springfield.”

Most recently the group, in collaboration with the Adult Education Team at the church, sponsored a series called “The Stolen Beam” to explore the topic of reparations to Black Americans. The series was developed and facilitated by the Jewish Community of Amherst and included lots of information on systemic racism that many group members had not known previously.  Future plans include “Don’t Stop” (remembering Ronn Johnson’s words) - a series of programs sponsored by both teams at the church to examine the history of slavery in Longmeadow.

“Our first pastor at our church, Stephen Williams, owned slaves. Some of them, unacknowledged members of our church, may actually be buried in the cemetery next to the church. We want to remember and honor these people in some meaningful way,” said Helene Houston, chair of the Adult Education Team at First Church.  On May 22 at 11 AM, Melissa Cybulski, an expert on the Stephen Williams Diaries from the Longmeadow Historical Society, will lead the discussion of “Say Their Names” as the church prepares to acknowledge these enslaved persons in a more formal way.

“This event will be open to the community as we all learn about the early history of our town and reflect on injustices that still persist,”  Houston added.