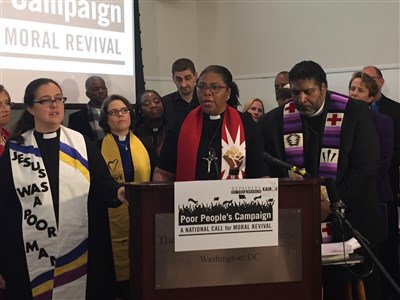 On December 4, 1967, the Rev. Dr. Martin Luther King Jr. announced plans for a Poor People's Campaign to organize individuals around the country to action, in a movement to end poverty, racism, and militarism in America. Monday, exactly 50 years later, interfaith leaders came together in Washington, D.C., to launch a revival of that campaign, which was stalled by King's assassination in 1968.

The Poor People's Campaign: A National Call for Moral Revival is led by the Rev. Dr. William J. Barber II, a black minister and civil rights leader from North Carolina, and the Rev. Dr. Liz Theoharis, a white theologian from Milwaukee, with the full support of a number of religious denominations, including the United Church of Christ. The Rev. Traci Blackmon, a UCC national officer, joined the movement leaders in D.C., to lend her voice to the campaign's launch.

During a briefing at the Methodist Building in the shadow of the U. S. Capitol the morning of Dec. 4, Blackmon drew parallels to Advent, a season of waiting for salvation, in her comments about the need for justice to overtake greed.

"The prophet Isaiah says … a voice is crying out in the wilderness to prepare the way of the Lord. In Isaiah's day, I believe that cry was the voice of those who were victimized and villainized by the oppressive and unjust actions of those in power," Blackmon said. "Today, I believe a voice is still crying out. I believe that this Poor People's Campaign, led by Dr. Theo Harris and Dr. Barber, is that voice today. I believe that all of us gathered here to declare a pathway toward justice are that voice."

Read the full story at ucc.org